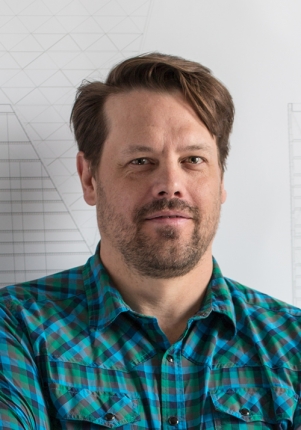 The building sector contributes up to 30 percent of global greenhouse gas emissions and accounts for as much as 40 percent of the world’s energy consumption, according to the United Nations Environment Programme. Ellinger wants to turn those statistics around by designing structures that give back to the environment, making our air cleaner or bringing farms closer to consumers. “I’m interested in how we as architects can change the way we think about building,” Jefferson Ellinger says.

With his partners at Fresh Air Building Systems, he recently installed the first active modular phytoremediation system (AMPS)—basically, a “probiotic” plant wall connected to the HVAC system—in the Bronx. The result is cleaner air and less energy use.

Meanwhile, his E/Ye Design partnership recently built one of the country’s first vertical greenhouses in Jackson Hole, Wyoming, where short growing seasons and high elevation limit traditional crop farming. “The area of land that we’re operating on is one-tenth of an acre,” he says of the three-story hydroponic greenhouse, which uses a conveyer system to move plants and maximize sun exposure. “We can produce the same amount as a five-acre farm.”

Back on campus, Ellinger brings his outlook on architectural sustainability into the classroom.