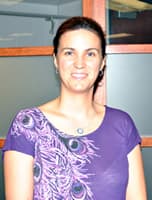 An all-conference athlete as a UNC Charlotte undergraduate, Ozlem Cankurtaran now employs her skills as a network specialist with the Information Technology Services Office. The former varsity scholarship volleyball player traveled to the Queen City from her home of Istanbul, Turkey, in 1997. She said she was unsure of what to expect.

“It was the first time that I was away from my family, and I was concerned about the language barrier,” said Cankurtaran. “In Turkey, the stereotypical view of the United States is New York or Los Angeles. So Charlotte was a huge culture shock – I didn’t expect to see so much greenery. The Turkish people are a very friendly people, so Southern hospitality was not a surprise. The Athletics Department did a really good job of looking after me; when I arrived I felt like I had a family here with the other team members.”

As a student-athlete, Cankurtaran traveled up and down the East Coast for volleyball matches. She said the ability to see various parts of the United States was a great advantage. She began playing the sport as a fifth-grader in her native country. In addition to being a member of school teams, Cankurtaran competed on club teams, too. She said in Turkey, the clubs recruit their players, who usually are among the elite competitors in the country. As high school graduation approached, Cankurtaran began sending CDs about herself to collegiate volleyball coaches in the United States. Eventually, the 49ers offered her a scholarship.

Entering college as an undecided major was a cultural difference. “In Turkey, everyone who plans to go to college must take a comprehensive test that covers everything you studied in high school. Your score determines what career you can pursue,” explained Cankurtaran.

Eventually, she decided on international business and information systems, completing a bachelor’s degree from the Belk College of Business. She also was a student worker with ITS.

“My UNC Charlotte experience was great, which is why it is rewarding to work here,” Cankurtaran said. “I feel like I am giving back to the University and helping it to advance.”

Cankurtaran and her colleagues endeavor to provide faculty, staff and students a stable network in support of the campus’ computer infrastructure, which includes data, telephones and wireless capabilities. During the academic year, their work must be scheduled around classes, so the more intensive upgrades and retrofitting of network closets occur in the summer.

Family is Cankurtaran’s focus beyond the University. She and husband Tulu, a database administrator at Presbyterian Hospital, live in the Huntersville area with their two daughters Alara, 4, and Tuana, 2 1/2. Cankurtaran said the family is planning to visit Turkey later this year, so her children will be able to learn more about their heritage.