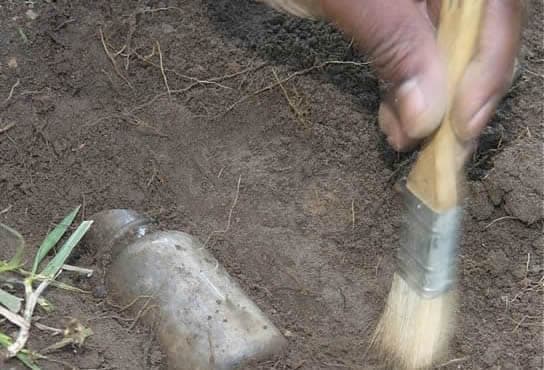 While many of their peers were sitting in air-conditioned classrooms during the summer, some UNC Charlotte students literally were getting their hands dirty while making some important discoveries about Mecklenburg County’s past.

Led by anthropology professor Janet Levy and Alan May, curator of anthropology at Gaston County’s Schiele Museum, the students battled ticks, poison ivy (and enjoyed sunshine and fresh air) as they unearthed artifacts from the site of the historic Holly Bend house, which was built between 1795 and 1800 in the northwest corner of the county.

As part of a class, the students worked in the field from 9:00 AM to 1:00 PM, Monday through Friday. The purpose was to conduct basic exploratory work to provide information for the planned development of the site, which was purchased for $6.6 million by the county.

The dig was the latest example of an ongoing collaboration that dates back more than 25 years, between the University and the Gastonia museum. According to Levy, the project provides students with a hands-on experience in the field. In turn, the museum benefits through the opportunity to collaborate with faculty experts on a local project.

Listed on the National Register of Historic Places, the Holly Bend house was built by Robert Davidson, son of John Davidson of Revolutionary War fame. It was once center of a 2,800-acre plantation and is an example of Federal Neoclassicism style.

The county plans to restore the house in partnership with local preservation groups and eventually open it for public tours and events. For now, it provides an educational experience for students who are interested in the past.

The work is difficult and very meticulous. During one day’s work in earlier this summer, the students used shovels and trowels to search through two-meter-square grids for fragments of pottery, bottles and other items. When something of interest was located, its precise location was documented.

While some students were busy digging, others were taking buckets of dirt and sifting the soil through a screen to pick out anything noteworthy. Some early discoveries included fragments of Pearl ware, which dates to the time of the construction of Holly Bend.

“Getting out in the field and breaking a sweat doing this sort of work is not that bad,” said Doug Sanders, 23, a senior applied anthropology major from Raleigh, wiping a bead of sweat from his brow. “I would absolutely enjoy it if I could turn this into my career.”