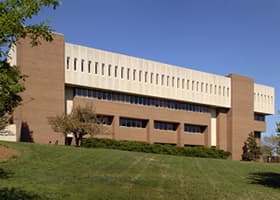 Built to house the University’s earth and life sciences programs, the McEniry Building is named for UNC Charlotte’s first vice chancellor for academic affairs, William Hugh McEniry. The $4 million, 103,000-square-foot facility was completed July 7, 1975, to house the departments of Geography and Earth Science and Biology.

Chancellor Dean Colvard hired McEniry (pronounced My-Canary) in 1967; Colvard was searching for a top-notch administrator with an arts and sciences background. Based upon numerous recommendations, Colvard recruited McEniry away from Stetson University where he had spent 27 years and served as a university dean. Ready for a new challenge, McEniry and his wife, Mary, relocated to North Carolina and settled into a 17-acre plot of land between the University and Huntersville they dubbed “Rural Simplicity.”

Dedicated to improving higher education for blacks, McEniry served as a trustee of Johnson C. Smith University. In addition, he personally financed scholarships for some black students and worked with the Ford Foundation to improve academics and the curricula for historically black colleges.

In 1973, McEniry agreed to serve as acting chancellor at Western Carolina University in Cullowhee until a permanent chancellor was hired. He passed away on March 15, 1974, at the age of 57.

The McEniry Building is just one lasting tribute to the University’s pioneering vice chancellor. Each year, a member of the graduating class with the highest GPA receives the W. Hugh McEniry Award for Academic Excellence. The North Carolina Association of Colleges and Universities named its top honor for the trailblazing educator - the Hugh McEniry Award for Outstanding Service to North Carolina Higher Education. Following McEniry’s death, Stetson University established the McEniry Award, a prestigious honor given a professor as selected by faculty members and students.