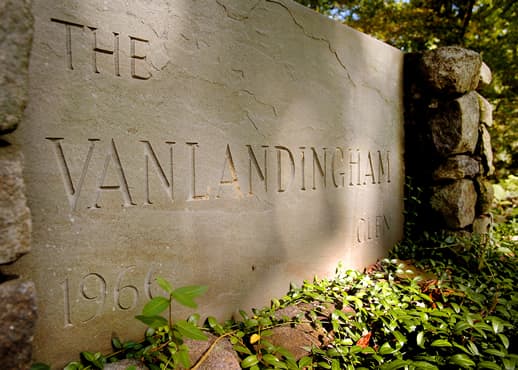 Seven-acre Van Landingham Glen is one of the largest public rhododendron gardens in the Southeastern United States, and it showcases native plants from around the Carolinas, too. Prominent Charlotte stockbroker and philanthropist Ralph Van Landingham provided the financial support for the glen, which was dedicated in his honor on Sunday, April 27, 1966.

As with a number of other campus beautification projects, the glen resulted from the pioneering vision of biology professor Herbert Hechenbleikner and University founder Bonnie Cone. The steep north-facing ravine with two small streams located on campus was unsuitable for building, but they thought it was the perfect location for a garden. With funding from Van Landingham, Hechenbleikner started clearing land and planting.

The glen began with about 250 hybrid varieties of rhododendron of blooming age and 700 smaller plants that would begin to blossom during the next two to five years. Several dozen specimens of native azaleas and various woody and herbaceous plants native to the Western North Carolina mountains were planted, too.

Van Landingham initially provided an endowment fund to establish and maintain the glen, along with the Susie Harwood Garden named in his mother’s honor. In 1970, Van Landingham died, leaving his stately home, located at 2010 The Plaza, and the estate’s beautiful rhododendron gardens to the University. He requested the residence be maintained and serve as a facility for receptions, social gatherings, meetings, botanical research and other functions. University officials sold the home and gardens, and the proceeds were added to the previously established endowment fund.

Now nearly 50 years later, Van Landingham Glen continues to blossom and grow. Roughly 3,500 rhododendron and azaleas are part of the glen, as well as more than 900 species of indigenous trees, shrubs and wildflowers and greater than 50 species of wild ferns. A high canopy of hickory, oak, poplar and black gum trees protect the plants and a 120-year-old log cabin reconstructed on the site adds character to the surroundings. One of Charlotte’s top visitor attractions, Van Landingham Glen also features well-marked trails and footbridges across two streams. This tranquil campus treasure also serves as the final resting place for University matriarch, Miss Bonnie.