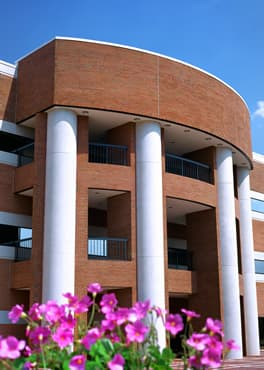 The Ida and William Friday Building houses the Belk College of Business, and it honors the many contributions of William C. Friday to the University of North Carolina system.

Born in Raphine, Va., Friday grew up in the Gaston County town of Dallas, where he played baseball and basketball. He attended N.C. State University, graduating with a bachelor’s degree in textile manufacturing. As a senior, Friday met Ida Howell from Lumberton who was pursuing a bachelor’s degree in home economics at Meredith College. They married on May 13, 1942, and Bill Friday continued his education at UNC-Chapel Hill where he earned a law degree. Ida Friday also furthered her studies, obtaining a master’s in public health from UNC-Chapel Hill.

Friday, who died in October 2012, spent the majority of his career in higher education. He was assistant dean of students at UNC-Chapel Hill, assistant to the president of the Consolidated University of North Carolina and secretary of the University of North Carolina. At age 36, Friday was named acting president of the UNC system. He would lead the system until 1986. During his tenure, he became recognized as one of America’s most respected and effective educational leaders. Through the 1963 Higher Education Act, Friday redefined the purpose of each institution of the UNC system (at the time, UNC-Chapel Hill, N.C. State University and UNC Greensboro; UNC Charlotte become the fourth member of the system in 1965). In 1972, he reorganized the entire system which had grown to include 16 campuses (now 17 after the addition of the N.C. School of Science and Mathematics).

On more than one occasion, Friday noted his achievements could not have been possible without his wife, Ida. He said, “It took two of us to do this.” As “first lady” of the UNC System, Ida Friday was active in community service, including president of the Chapel Hill Preservation Society, member of the board of the North Carolina Symphony Society, chair of the YMCA and YWCA at UNC-Chapel Hill and a member of the League of Women Voters.

Dedicated in 1982, the Friday Building incorporated the best classroom designs for teaching future business leaders for its time. UNC Charlotte faculty and staff, along with the architect, visited a number of institutions recognized for having leading business programs, including Harvard University, the University of Virginia and the University of Tennessee.  The Friday Building’s classrooms are modeled after the case classrooms pioneered at the Harvard Graduate School of Business. 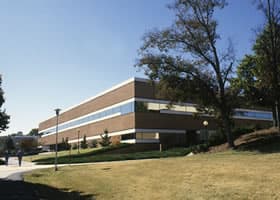 The 64,000-square-foot building was designed to accommodate a third floor, which was constructed in 1994-95 using $3 million from a state bond referendum approved by voters in 1993. Changes in the building code required the University to make the facility more earthquake resistant. The columns that grace Friday Building contribute to its distinctive look; they were added during the expansion at the suggestion of Chancellor Emeritus Jim Woodward.

Photos (inset) The late Bill Friday and a picture of the Friday Building taken in 1988.