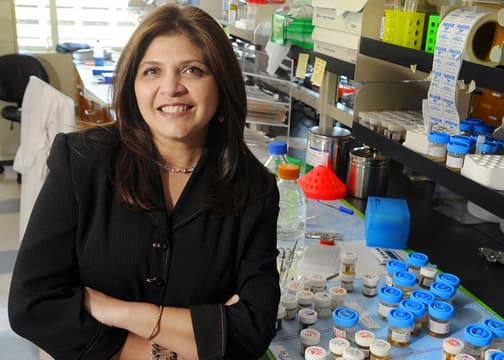 Distinguished cancer researcher Pinku Mukherjee was honored with the O. Max Gardner Award – the highest faculty accolade given by the Board of Governors of the University of North Carolina. She was presented the honor formally Friday, April 10.

The award, established by a provision in the will of Gov. O. Max Gardner, recognizes UNC system faculty members who have “made the greatest contribution to the welfare of the human race.”  It is the only award for which all faculty members on the 17 UNC campuses are eligible. The honor, given annually since 1949, carries a $20,000 cash prize.

As the Irwin Belk Endowed Professor of Cancer Research at UNC Charlotte, Mukherjee is transforming the ways in which cancer is diagnosed and treated. She has designed innovative approaches to more accurately detect breast cancer early and is developing targeted therapy and imaging for pancreatic, ovarian and colon cancers.

To date, Mukherjee has published 65-plus peer-reviewed journal articles that have been cited or referenced more than 11,000 times. Her groundbreaking cancer research has produced one U.S. patent and has resulted in grants from the National Institutes of Health, the U.S. Department of Defense, and the Susan G. Komen Foundation totaling more than $3.5 million as principal investigator and more than $500,000 as co-investigator.

Mukherjee also is an astute entrepreneur. Using an innovative approach to cancer research as a basis, she and her team founded the biotechnology company OncoTab Inc. in 2011 (previously CanDiag Inc.). A UNC Charlotte spinoff, OncoTab Inc. develops and commercializes products that span the lifecycle of cancer, from initial diagnosis through treatment and recurrence monitoring. The company has an exclusive license to a patented technology platform that has successfully demonstrated diagnostic, imaging, and therapeutic capabilities with breast, prostate, and pancreatic cancers. The company already has won several awards including one from NCBiotech as well as the grand prize at the Charlotte Venture Challenge.

Prior to joining UNC Charlotte in 2008, Mukherjee was with the Mayo Clinic. She received her bachelor’s degree in microbiology from Bombay University, India, and her master’s and doctoral degrees from the University of London.

Traditionally only one winner of the award is named per year, but committee members were equally impressed with the work of Mukherjee and Pourdeyhimi, said Gardner Award Committee Chair Ann Maxwell. In addition to being world-class scientists and leaders in their fields, she said, the two are “outstanding teachers, unique mentors and tireless ambassadors for our state and our universities.”