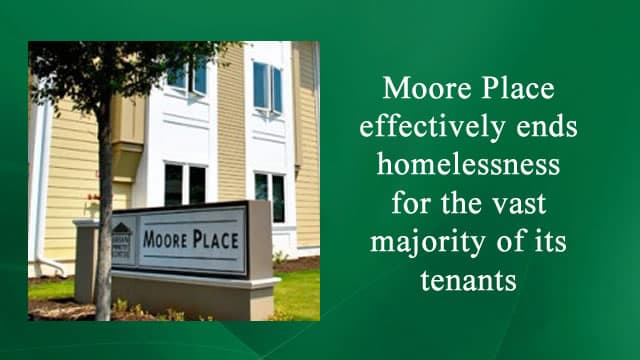 A nationally recognized program to house Charlotte’s chronically homeless continues to help people and save money as it enters its fourth year, according to a UNC Charlotte report.

The 85-unit apartment complex at Moore Place provides housing for individuals who have extensive histories of homelessness and at least one disabling condition.

The new study led by Lori Thomas, professor of social work in the College of Health and Human Services, found that Moore Place effectively ends homelessness for the vast majority of its tenants; 81 percent of those who participated in the study remained in permanent housing after two years. Tenants were homeless an average of seven years prior to finding housing at Moore Place.

The impact on tenants’ relationship with the health care system is equally significant. During the two years since moving in, Moore Place tenants visited emergency rooms 648 fewer times (81 percent reduction) and were in the hospital 292 fewer days (62 percent reduction) than the two years prior. This led to a $2.4 million decrease in total billing, a drop of nearly 70 percent.

Thomas said the transformation in the way tenants take care of their health is among the report’s most telling findings.

Instead of ambulance calls and ER visits, tenants began to address their health needs with visits to primary care doctors and through planned procedures, according to the study. Use of outpatient services increased by 53 percent.

Opened in 2012, Moore Place is the first facility of its kind in the Charlotte area, but so-called “housing first” programs are gaining momentum nationwide. Thomas said there is a reason why these initiatives work.

Unsurprisingly, it appears it’s easier for a person to get better with a roof above his or her head.

Moore Place residents also are supported by a team of social workers, therapists, a full-time nurse and a part-time psychologist.

The nonprofit Urban Ministry Center runs Moore Place. The annual cost to house someone there is around $14,000. Residents contribute 30 percent of their incomes for rent; the rest comes from a combination of private donations and public funding.

Caroline Chambre Hammock is the director of HousingWorks, Urban Ministry Center’s housing initiative. She said Thomas’ report confirms what they see every day at Moore Place—vulnerable people are getting help, and the health care system is being used more efficiently.

She added “this report has powerful implications for both Charlotte and the rest of the county.  It proves that investment in Moore Place has been well-placed and pays dividends for the community.”

“Studies suggest that health and mental health improve as formerly homeless individuals remain housed, including fewer symptoms associated with mental health disorders and the moderation and reduction of substance use.”

Considering all of this, the looming question is: if programs like Moore Place work so well, why are they not more widespread?

Thomas said that’s because “housing first is a sea-change for homeless service providers.”

Until recently, most providers tried to treat the underlying conditions that were thought to result in homelessness before making permanent housing available, she said. Those providers are now struggling to respond to mounting evidence pointing toward the opposite approach.

While public health professionals continue to sort through the data on these programs, the most compelling case for their continuation and expansion remains what they mean for the people whom they help.

As one Moore Place resident put it: “Housing is having my own. It’s a beginning; it’s hope; it’s a gift.”