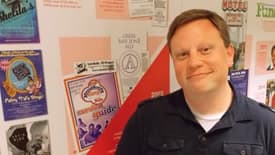 Charlotte Pride honors outstanding individuals each year with the “Champions of Pride Awards” in recognition of their demonstrated exemplary work and dedication to the LGBTQ community. This year, Josh Burford, assistant director for sexual and gender diversity in the Multicultural Resource Center, was honored with the Charlotte Pride “Harvey Milk Award.”

According to Charlotte Pride’s website, the Harvey Milk Award is given annually to “an individual or a couple to honor exceptional leadership, service to the community and those who champion LGBTQ causes that impact the Charlotte community and beyond.”

Burford stated, “I am honored to have been chosen for this award from Charlotte Pride. It’s so rewarding to know that my work to preserve local queer history resonates so much with the local community. I hope to be able to continue to expand this project, and I am in great company this year with the other award winners.”

Champions of Pride recipients will be honored with a lead position in the Bank of America Charlotte Pride Parade on Sunday, Aug. 16, followed by an awards ceremony at 4 p.m. on the Wells Fargo Stage. Other award winners include Charlotte City Council (District 5) member John Autry for the “Outstanding Ally Award” and Monroe high school activist Gabby Hubert for the “Young Catalyst Award.”

Material and artifacts collected for the University’s archive were featured in an exhibit entitled “Publicly Identified: Coming Out Activist in the Queen City,” which was displayed for six months in the Levine Museum of the New South in 2014.

Since arriving at UNC Charlotte in 2012, Burford has expanded the Multicultural Resource Center’s SafeZone program as well as initiated QY1 (Queer Year 1), a first-year initiative to connect students to LGBTQ resources on campus and in the community. He works with LGBTQ students and student groups and on campus inclusivity initiatives such as the Trans* Committee. He also teaches LGBT studies.