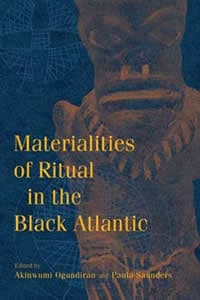 “Materialities of Ritual in the Black Atlantic,” co-edited by Akin Ogundiran, professor of Africana studies, was named an outstanding academic title for 2015 by Choice magazine.

In its January issue, Choice: Current Reviews for Academic Libraries published its list of “Outstanding Academic Titles” reviewed during the previous calendar year. According to the magazine, the list represents approximately 10 percent of the some 7,000 works reviewed by Choice in 2015.

The list is based on overall excellence in presentation and scholarship, importance relative to other literature in the field, distinction as a first treatment of a given subject in book or electronic form, originality or uniqueness of treatment, value to undergraduate students and importance in building undergraduate library collections.

Choice is published by the Association of College and Research Libraries.