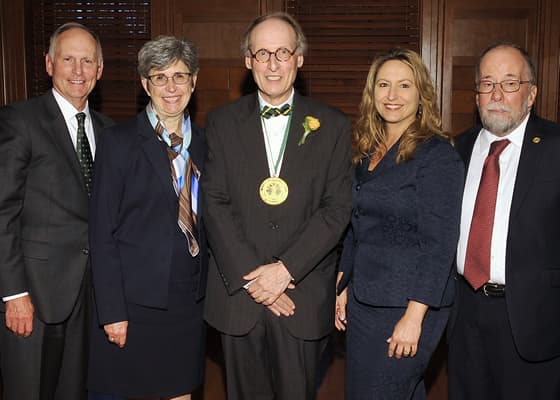 A ceremony was held Tuesday, April 12, at the Harris Alumni Center to formally honor Smith. Each year since 1987, the University with support from First Citizens Bank presents this award to recognize and foster the advancement and diffusion of knowledge and creative endeavors.

Research conducted by Smith contributes to the current body of knowledge on slavery, race and race relations in American and Southern history. His interests include questions of race, slavery, war and post-emancipation adaptions of the formerly enslaved and enslavers. Such expertise has led to works like “Black Judas,” a study of racial identity and interest for the perspective(s) of a black Civil War veteran, lawyer and journalist.

“Tonight we celebrate Dr. John David Smith, a scholar whose research has greatly influenced the body of knowledge surrounding Southern history, American history and African American history,” said Chancellor Philip L. Dubois. “Colleagues characterize his scholarship by the depth of his research and his ability to investigate unknown — and sometimes unpopular — sources that bring new perspectives to the study of American and Southern history.”

As a historian, Smith expanded the understanding of the dynamics and directions of “racial thought” by examining German-speaking racial theorists in Europe as well as white Southern mythmakers for the “lost cause” of the Confederacy in the American South. His book-in-progress on the slave reparation movement, under contract with Oxford University Press, points to the persistence of expectations for acknowledgment of past wrongs and injustices.

Before joining UNC Charlotte in 2004, Smith taught for 22 years at North Carolina State University. During this time, he was awarded a Fulbright appointment to the Ludwig-Maximilians-Universität in Munich, Germany.

Colleagues distinguish Smith’s scholarship by the depth of research. One of them, an award-winning author, said, “It is impressive by any measure. His record of scholarship ranks him among the most productive historians of our day.  In a word, Dr. Smith is a scholar’s scholar.”

Smith has published 28 books, more than 150 journal articles and book chapters, and he was the founding director of the Public History program at N.C. State. Additionally, he has served on a number of editorial boards for scholarly publications, including the Journal of Southern History, and as contributing editor to the Journal of American History. He also serves on the Advisory Council of the Lincoln Prize and has chaired the jury of the Frederick Douglass Book Prize.

He completed a master’s degree in American history and Ph. D. in Southern history at the University of Kentucky.

“First Citizens Bank is delighted to continue our relationship with UNC Charlotte — now in its 29th year — to honor an exceptional faculty member with the Scholars Medal,” said Kim Allred, senior vice president for First Citizens Bank. “This award reflects our bank’s ‘Forever First’ commitment to the people, businesses and communities we serve. It’s a great privilege for us to join together with the University in recognizing Dr. Smith and his prestigious work.”

The First Citizens Bank Scholars Medal was created to spotlight the important contributions UNC Charlotte and its faculty are making, not only in its community, but also throughout the Carolinas, the nation and the world. Past award recipients have influenced scholarship in a number of academic disciplines and fields, including engineering, psychology, sociology, anthropology, biology and arts and photography.