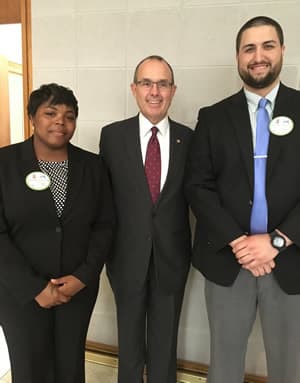 Marcus Lawrence, a doctoral student in biology, and Alexandra Hurst, a master’s student in chemistry, joined other graduate students from across the state at this event, which provides a platform for them to showcase their research and its impact on the state of North Carolina. Legislators met with students and faculty members to learn more about various research being conducted at North Carolina universities.

Lawrence, from China Grove, is researching age-related muscle wasting (sarcopenia) and testing how the storage of extra carbohydrates might counteract this condition by creating new proteins in the body that rescue growth of the deteriorating muscles. Hurst researches alternative methods to combat antibiotic resistance, such as the photodynamic inactivation (PDI) of bacteria. Both students emphasized how their research could positively impact citizens in the state.

Graduate education is a building block for scientific exploration, and it is a driver for the state’s economy. According to the U.S. Bureau of Labor Statistics, individuals who obtain doctoral or master’s degrees earn $200 to $400 more per week than those with bachelor’s degrees; they also have substantially lower unemployment rates. Research conducted by graduate students attracts business and industry to the state, as most employers recognize the correlation between a strong pipeline of talent and innovation and higher education.

“Graduate Education Day gives us a chance to spotlight the amazing talent and good work being done by graduate students at UNC Charlotte,” said Tom Reynolds, associate provost and dean of the Graduate School.  “We know how important graduate research is to the North Carolina economy and this event highlights that.”

Graduate Education Day is held annually and presented by the North Carolina Council of Graduate Schools.