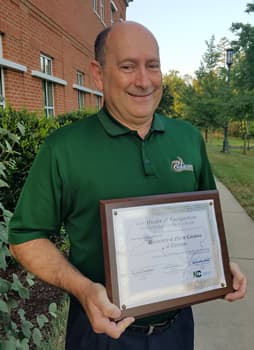 UNC Charlotte received a certificate of recognition during the Appalachian Energy Summit for its commitment and achievement to reduce campus energy consumption by 30 percent. The University was lauded as the largest institution in the UNC system to reach this benchmark.

In 2003, state agencies were given a mandate to reduce energy use by 30 percent by 2015; at the time, this was considered to be an ambitious goal. Throughout this time, the University’s Facilities Management Department has worked to reduce energy consumption while meeting the demands of a rapidly expanding campus. New lighting and air conditioning controls contributed greatly to the University’s ability to meet the reduction. Designed efficiencies built into the renovations and new construction across campus were among the more significant efforts that contributed to energy reduction efforts, too.

Tony Schallert, University energy manager, has led the charge to assess and report successes of the energy reduction plan; he accepted the award from Len Hoey of the N.C. Department of Environmental Quality.

“Energy conservation is a team effort,” Schallert said. “Everyone from the maintenance crew to capital project designers plays an important role to incorporate and maintain energy efficient innovations.” As a result of this team effort, University energy costs decreased by $5 million within this past year alone.

Facilities management officials have set a goal to achieve an additional 10 percent energy reduction by 2025.

Now in its fifth year, the Appalachian Energy Summit is an annual energy leadership gathering hosted by Appalachian State University.