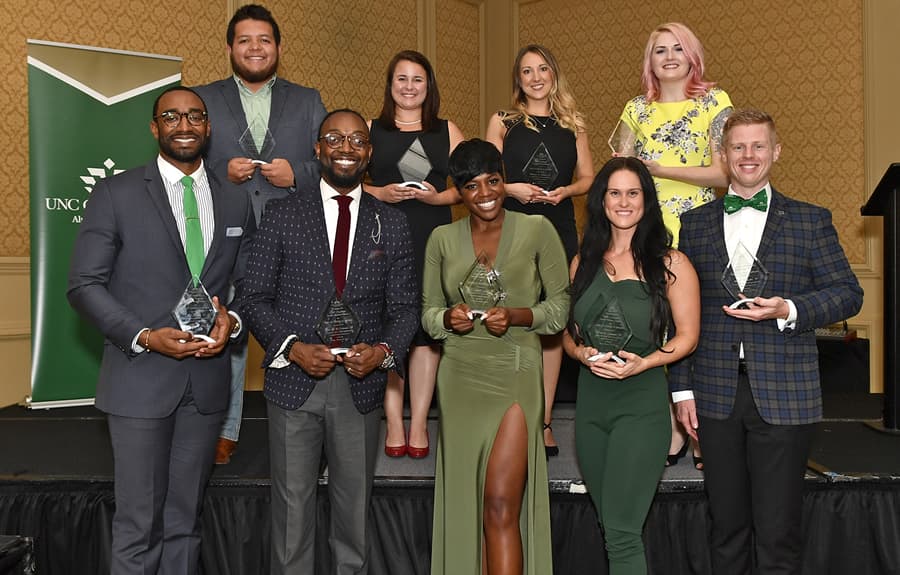 UNC Charlotte’s young alumni waste no time in making marks in their fields and in the community, as evidenced by the inaugural 10 Under Ten Award winners - among them: a creative designer working in Los Angeles, a fashion designer who styles Charlotte executives and a YouTube show host using her media platform to spread positive vibes. They were honored at an awards dinner at the University Hilton on Friday, Oct. 12, as part of 2018 Homecoming festivities.

The UNC Charlotte Young Alumni Chapter presents the 10 Under Ten Award. The honor recognizes alumni who have graduated within the past 10 years and who are succeeding in their professional lives and actively involved in community volunteerism and philanthropy. These alumni epitomize what it means to give back and pay it forward, and they credit UNC Charlotte with providing the foundation to do so.

“To date, nothing has influenced my career and standards within the professional arena more so than my time as a Niner,” Castagno said. “I was facilitated and challenged with my time at UNC Charlotte and am eternally grateful for the opportunities I didn’t know that I would have with the Niner clan behind me.”

Theater major Mary Kenny ’10 is a creative designer and producer in Los Angeles. She also started the nonprofit resisterhoodLA, which provides volunteer and opportunities to do social good for Los Angeles activists. Some of the events resisterhoodLA has hosted include a book drive, a drive to collect feminine hygiene products for homeless women and girls and the production of a short film with an all-female filmmaking team to benefit survivors of sex trafficking.

As a professional wardrobe consultant, Ryan Jor El Coleman ’09 styles Charlotte executives and entrepreneurs. But the husband and father of two balances his bustling fashion career with his philanthropic passion. He created Black Fathers Rock, a nonprofit that seeks to dispel myths about black fathers. Coleman completed a degree in business management with a concentration in managerial leadership. He also mentors youth through his fraternity, Kappa Alpha Psi Inc.

Juan Alfredo Fuentes ’14, who earned a degree in industrial and systems engineering, works as a manufacturing and production analyst for Coca-Cola. He is a professional development speaker for the Lee College of Engineering and is an advisory board member for its Engage ME, a program designed to recruit and graduate multicultural engineering students.

Nikki Curley ’15 holds a degree in civil engineering and is employed at LandDesign Inc., where she works on land development projects of various scales. She is committed to leadership development and is chair of the inaugural board for the Lee College of Engineering Academy Alumni, where she helps alumni develop as leaders. At LandDesign, she founded Leadership Matters to promote opportunities for self-development for her colleagues across all departments.

Ohavia Phillips ’15 is a producer for Spectrum News, where she’s helped cover major events such as Hurricane Florence. But the communications major has taken her infectious personality to the internet, where she hosts a YouTube program “The Oh Show.” The show, which lets Phillips combine her love of media and positivity, aims to empower, inspire and offer practical advice to help people grow and celebrate themselves.

Eric Marsh ’10 earned a civil engineering degree from UNC Charlotte and works as a strategic analyst for Durham County. Marsh was a student leader at UNC Charlotte, having been a member of the National Society of Black Engineers, a two-term president of the collegiate chapter of 100 Black Men and a mentor to freshmen and first-generation college students through the University Center for Academic Excellence. Marsh has traveled to four countries on mission trips and helped launch five nonprofits.

Daniel Jacobs ’08 is a physician assistant and director of orthopedic urgent access services at Massachusetts General Hospital in Boston. But prior to taking that job Jacobs, who earned a degree in athletic training, worked for several years at OrthoCarolina’s University office in Charlotte, specializing in sports injuries and total hip and knee arthroplasty. He also worked as a trainer for the Charlotte 49ers, was an adjunct faculty member in the Department of Kinesiology and has held multiple leadership roles at the University, including as an ambassador for Niner Nation Gives, as well as in the Atlantic 10 Conference and the NCAA.

Brittney Connor ’15 believes one must learn to lead themselves before they can lead others. The motivational speaker and workshop facilitator owns Catalyst 4 Change LLC, helping to coach others in effective communication strategies. Connor, who earned a degree in psychology, has brought her talents back to UNC Charlotte as a mock interview facilitator. She holds many leadership roles in the Charlotte community, including as 2018-19 area director for Toastmasters International, 2018-19 secretary for the Advanced Communicators of Charlotte and co-founder of the local chapter of the national nonprofit ChickTech Charlotte. Connor aims to be an international speaker and coach.

A catalyst for the Charlotte fitness community, Brian Mister ’12 founded the NoDa Brewing Running Club in 2012, which created athletic activities at Charlotte’s beverage hotspots. Mister earned a degree in marketing from the Belk College of Business and is the marketing director for the Charlotte Marathon.