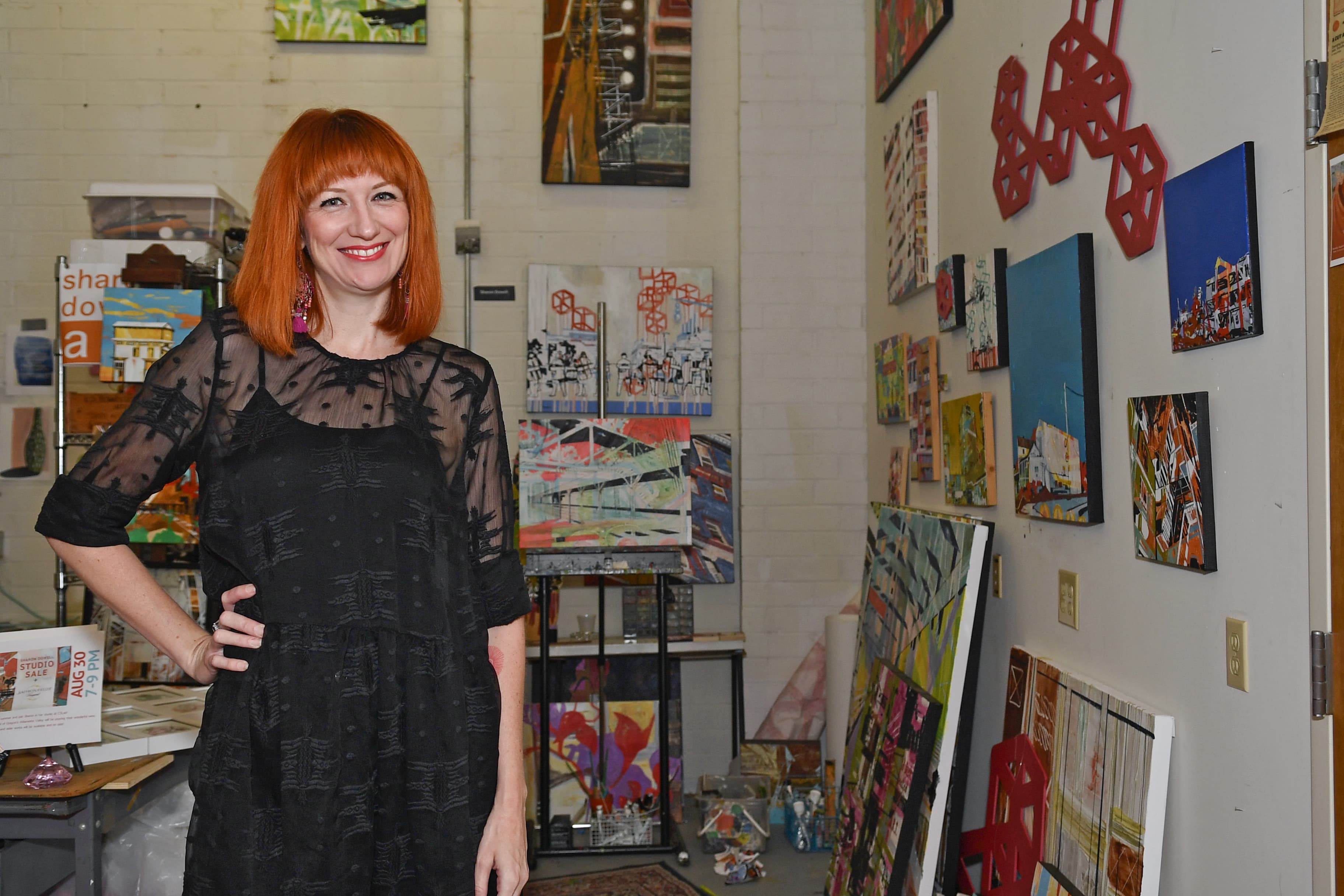 For years, the Queen City has experienced one of the highest population growth rates in the country. New residents, many of whom are UNC Charlotte students who stay when they become alumni, come seeking opportunity. Their arrival contributes to the diversity and vibrancy that is transforming Charlotte into a world-class city with a rich story to tell.

While that story unfolds in a variety of ways, local artisans are using public art to create narratives that tell a story and shape how Charlotte appears.

Sharon Dowell ’02, both a UNC Charlotte alumna and public artist, has established a strong presence in the Charlotte arts community.

“It’s really exciting to contribute to the cultural landscape of a growing city, and I hope, even if just a little bit, my art is helping to write or reflect Charlotte’s story.”

“I love public art; it has the ability to remove the intimidation factor associated with art that so many people in our society experience. Art in public spaces becomes embedded in one’s subconscious, a part of daily life that one embraces without even contemplating it,” she explained.

A native of Houston, Texas, Dowell has spent the past two decades in the Queen City. Since earning a Bachelor of Fine Arts from the University in 2002, she, along with a handful of other alumni artists, have increasingly left their mark on the city through public art.

Armed with the belief that public art can shape a city’s identity, Dowell often tries to make an impact by capturing the energy of a place while finding the beauty in overlooked spaces.

“Public art can be a lot of things but, most importantly, it should contribute to the cultural landscape of a city and work to enliven the space,” she said. “While it can be purely artistic, often it serves to communicate a social, political or popular message.”

Dowell’s work can be seen throughout Charlotte, including along the Charlotte Area Transit System’s LYNX Blue Line. Those pieces represent some of her most impactful work.

“I was fortunate to receive commissions for two projects along the light rail, the 25th Street Station and the corridor under the I-277 bridge—which provides a throughway for both the train and people to navigate in and out of Uptown Charlotte,” said Dowell. “Combined, these projects took eight years to complete and are definitely the most challenging, largest scale and highest impact projects I’ve done.

“Designing the bridge corridor was a lot of fun, not only because it was a huge space, but I was thinking about multiple perspectives—the pedestrians as well as the train passengers, and considering the amount of detail that was necessary and what it might look like,” she added.

In the end, Dowell created a vibrant and colorful piece titled “Halcyon Idyll” that aims to capture the relationship between man and nature. She said she hopes that both can coexist as the city continues to grow.

“We think of progress as buildings and skyscrapers, so I incorporated imagery of uptown construction intertwined with some vines and organic imagery,” she explained. “Prior to the light rail, this area was kind of forgotten, so it is nice to be a part of a project that is revitalizing a space.”

As Dowell continues to create public art throughout the city, she said the relationship with what is now her hometown is what she continues to cultivate and finds most rewarding.

“I’ve had the opportunity to interact with a variety of communities within Charlotte through the research I’ve conducted while working on my public art projects,” she said. “I’ve grown to love the city more as a result of my work, and I think that affinity is continually showcased through the work I do.

“As I learned more about the city, the more it is represented in my art,” she added. “What’s great is that ties back to the notion of public art’s ability to shape a city’s identity. It’s really exciting to contribute to the cultural landscape of a growing city, and I hope, even if just a little bit, my art is helping to write or reflect Charlotte’s story.”