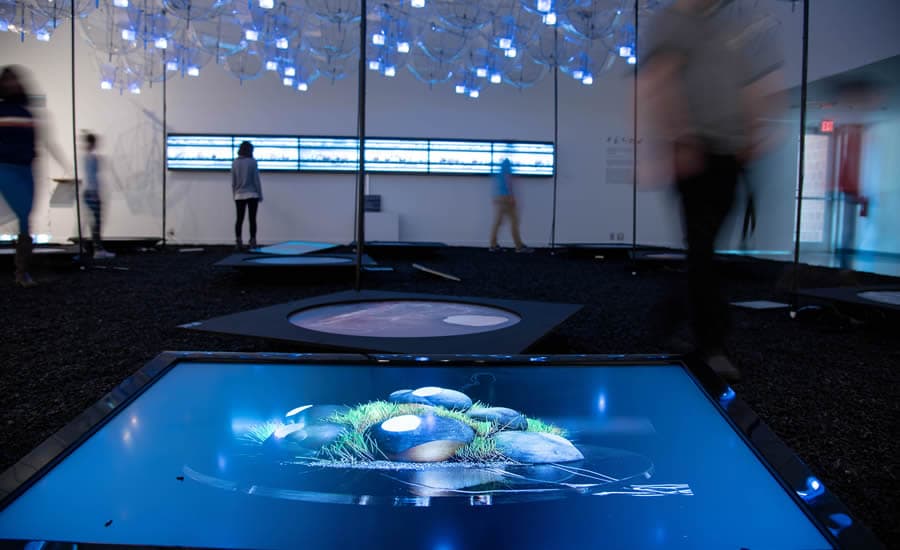 On view through Nov. 16, an exhibition in Storrs Gallery brings together data, technology, imagination and artistic expression to challenge viewers to reconsider the notion of “the visible.”

“SEE-ING: The Environmental Consciousness Project” presents work by a dozen artists and architects from across the globe that explore themes such as how technology is transforming visual perception, how “invisible” forces shape lives and how spaces—walls, rooms, buildings—are “alive” with energy and the capacity to communicate.

The work of guest contributors is displayed in an immersive, multi-sensory environment designed by the exhibition’s curator, Assistant Professor of Architecture Catty Dan Zhang. Video monitors and large images are embedded in a rubbery floor of shredded tires, while Zhang’s installation, “VENTS,” glows from the ceiling above. Created with a vast array of clear umbrellas, enhanced with blue lighting and a complex system of tubes, “VENTS” produces a rain of fog in puffs that are generated based on an input that hybridizes real-time local wind speeds and the recorded data sets of Hurricane Florence during a seven-day period. The data also affect the colored lights, which become lavender and glow brighter with stronger wind speeds. These “breezes” can be seen and felt during demonstration periods every Monday, Wednesday and Friday from 12:30 to 1:30 p.m.

Zhang asked guest contributors to submit work that addresses three questions: What perceives? What is perceived? and How does it matter? Artists and architects responded with pieces such as “Inhabiting Ruins,” by Bernadette Devilat, co-founder of London-based Devilat Lanuza Architects. “Inhabiting Ruins” presents an image and video rendered from a 3-D laser scanning record taken in January 2013 in the heritage village of Zúñiga, Chile, which suffered damage in the 2010 earthquake. This work explores the technology’s potential as a documenting tool and its importance to record the built heritage that is at risk of disappearance due to natural disasters.

Running across a long line of screens on a gallery wall, “Horizons” is a journey into a city “dreamed” by artificial intelligence. Created by Andrew Witt and Tobias Nolte, “Horizons” was inspired by the artist Ed Ruscha’s book “Every Building on the Sunset Strip.” Custom artificial intelligence (AI) software generates an endless street view of a fantasy city, comprised of five related, infinite horizontal views of imagery drawn from buildings in existing cities, including Hong Kong, Paris, Amsterdam and Cappadocia.

Another image/video presentation demonstrates that solid matter, which we often perceive as inert, is actually buzzing with energy. Running on a screen embedded in the rubber floor, a video of “The Objects Pallas and Gottfried,” by architects Mariana Ibañez and Simon Kim, shows someone touching the two objects, which then respond to the human touch by emitting sound. The concrete substance of “Pallas” and “Gottfried” perceives changes in energy flow from the person’s hand, suggesting that “all traditional materials of architecture are sensate and perceptive,” said Ibañez and Kim.

Storrs Gallery is open from 9 a.m. to 5 p.m., Monday through Friday. A full list of artists and additional information is available on the exhibition website.