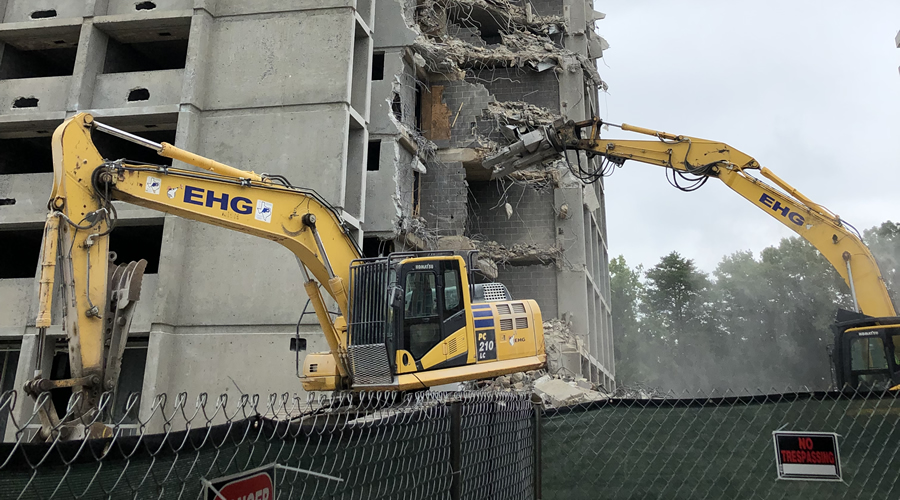 In their heyday, Moore and Sanford halls were at the center of campus life. Moore Hall residents had their own newsletter, and the dorm also had classroom space. One former resident recalled the convenience of having an algebra class held in the facility.

“The ability to go downstairs half-awake in my P.J.s for an 8 a.m. class did not improve my performance,” the former student shared.

Then, there were the legendary house parties, where students hung over the railings of one floor to watch people dance on another. A momentous occasion for many alumni was the chance to see then up-and-coming comedian Steve Martin at the Ratskeller for just 50 cents.

And who could forget the 2 a.m. fire drills and the annoying elevators?

Now, one of those twin towers is no more. The walls of Moore Hall were slowly demolished during the spring and summer. Students returning for the fall semester might have noticed what remains—concrete and mixed metal—piled next to SoVi Dining Hall. 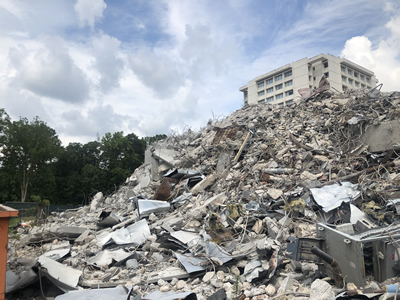 During the next several weeks, trucks will haul away the rubble, making way for the construction of  a new five-story, 600-plus bed residence hall in its place, said Elizabeth Frere, capital projects manager with UNC Charlotte Facilities Management.

Moore Hall was the first men’s dormitory on the UNC Charlotte campus. It was named for former Gov. Dan K. Moore. The 11-story residence hall was completed in 1969 at a cost of $1.7 million. Its 250 student rooms initially housed approximately 500 young men.

University officials have carefully evaluated whether to renovate or replace the aging Moore and Sanford halls; while Moore is being replaced, the future of Sanford Hall has not been decided.

Removal of Moore Hall started in January 2019, and the total project—which includes the construction of the new residence hall—will be completed in summer 2021.

Frere said the decision to implode the building or slowly demolish it was left to the contractors.

“When we bid the work out, we gave contractors that option, so they could decide for themselves … whether they wanted to choose implosion or taking it down piece by piece,” Frere said. “It all depends on the budget and timeline, so it was up to them to determine which they thought would be better.”

Frere said the concrete and mixed metals will be hauled to various recycling centers in the region.

“They’re recycling almost all of it,” she said.

During Homecoming last year, alumni took a last tour of Moore Hall before the demolition started. The UNC Charlotte Alumni Association also gave former residents the opportunity to recall their best memories of both Moore and Sanford Halls. Here’s some of what they shared:

“House parties were legendary in the years I was there,” one alum wrote. “The penthouse was known for having the best house parties and the best music on campus. One of the guys was in charge of creating the mixtape. They would block off the railing on the 11th floor, and he would be set up in the study room. The dance floor on 10 was always elbow to elbow, and people would be hanging over the railings on 11 to watch.”

“What to tell? What not to tell?” another alum wrote. “The Friday nights when people were running around the corridors blasted out of their minds. The group TV night for the last episode of ‘MASH.’ The time when three guys got collared for throwing a shopping cart out the window. (It wasn't them, BTW. But none of us ratted on the real culprits.) So many memories.”

“In the fall of 1980, my sister and I were excited to move into our new dorm room on the 10th floor of Sanford,” yet another alum wrote. “As fate would have it, torrential rains flooded our would-be new home, and we were asked to live in the study rooms on, I believe, the sixth floor of Moore dorm. With no window, no telephone and no closet, you'd think we were pretty miserable, but we were excited to be out on our own. The most miserable part, however, was the never-ending ping pong games out in the common area. It was maddening.”

“One year we were allowed to paint our halls whatever color we wanted. After that, I painted a large Snoopy on the wall in front of my room that everyone always enjoyed.”

“I met my future husband in Moore Hall. We would watch movies in the basement together with our friends. We will be getting married next year. Moore is where it all started for us.”