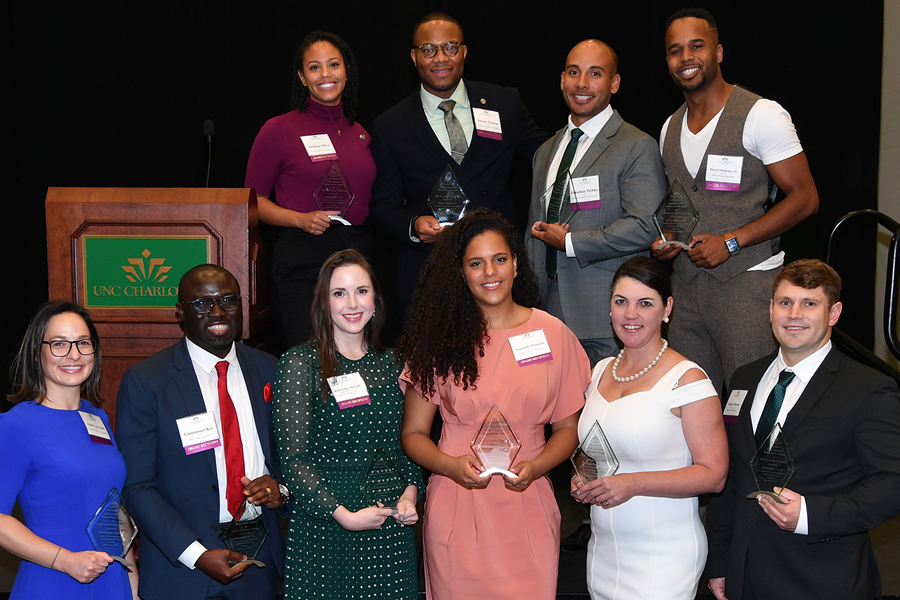 The UNC Charlotte Alumni Association celebrated Homecoming Week by honoring outstanding 49er alumni with the Ten Under 10 and Excellence in Leadership awards.

The UNC Charlotte Young Alumni Chapter hosts the Ten Under 10 Awards, which highlights accomplished alumni who have graduated within the past 10 years. This is the second year the Young Alumni Chapter has given the award. The recipients were honored during a reception on Sept. 26 in the Popp Martin Student Union.

The Ten Under 10 Award recipients were:

Darryl Bellamy ’12, a graduate of the Belk College of Business, who is an entrepreneur and self-described “overly involved student leader.” He is the creator of the Fearless Band Campaign, and many people continue to wear the #CharlotteStrong bands he created after April 30.

Paula Canter ’14 joined the United States Navy as an aviation machinist mate at age 19. At UNC Charlotte, she earned a Bachelor of Science in mechanical engineering with a minor in mathematics. As a student, Canter was vice president of the Society of Women Engineers.

Mykell Gates Jamil ’10 is director of school and community outreach at the Bechtler Museum of Modern Art. She studied painting and psychology at UNC Charlotte. She works with individuals from all walks of life, helping to bring art, creativity and inspiration to those who have traditionally been underserved in the Charlotte art community.

Emmanuel Kei ’16 is global product manager for Wells Fargo. He is a graduate of the Belk College of Business and is pursuing an MBA at the University of Maryland. He hopes to start a nonprofit organization to raise funds for epilepsy awareness and scholarships for youth with that condition in his home country of Liberia.

Justin Marsh ’11 started his career in the United States Navy as a nuclear-trained machinist mate. During his time as a student, Marsh led numerous organizations, and his leadership has continued in the workforce for Dewberry Engineers.

Katie Shue McGuffin ’09, ’12, ’15 MS, ’17 DNP is a faculty member in the UNC Charlotte School of Nursing and serves as the Doctor of Nursing Practice program coordinator and a clinical assistant professor. She has authored and co-authored a variety of publications in nursing and health-related journals and is a member of local, regional and national organizations.

Mellissa Oliver ’12 is an alumna of the William States Lee College of Engineering. She continues her service to the community through organizations such as the ACE Mentor Program and the Commercial Real Estate Women Network. In 2017, she was recognized by the Charlotte Agenda as one of its 30 Under 30.

Jonathan Peebles ’13 ’16 MPA is the development director for the Latin American Coalition. He gives back to UNC Charlotte through his service on the College of Liberal Arts & Science’s Alumni Council, the board of Charlotte EAST and the board of Young Democrats of Mecklenburg County as its immediate past president.

Jarron Thomas ’12 leads Fraud Strategic Initiatives for Global Banking & Markets at Bank of America. Outside the office, he leads Jump Institute, an organization focused on leveraging students’ social capital to engage them in S.T.E.A.M (Science, Tech, Engineering, Arts and Math). Thomas previously served as advisor to the Collegiate 100 Black Men at UNC Charlotte and vice president of Public Relations and chairman of Collegiate 100 for the 100 Black Men of Charlotte.

Samantha Timmons ’16 works for the United States Tennis Association as a business operations associate. In this  role, she supports the chief revenue officer in all commercial activities related to the U.S. Open, U.S. Open Series, USTA National Campus and other USTA properties. The Belk College of Business graduate was a sports marketing intern with the Charlotte 49ers Athletics Department. She was active with the Campus Activities Board, Homecoming Committee and was president of the Women’s Club Volleyball team. She is a member of Alpha Kappa Alpha Sorority Inc. Timmons was awarded Chancellor Philip L. Dubois’ Citation for Leadership and Service award during her senior year.

The UNC Charlotte Black Alumni Chapter recognized six alumni with its Excellence in Leadership Award, which honors University alumni and friends who have achieved excellence in the Charlotte community. A reception for the awardees was held Sept. 27 at the Harris Alumni Center.

The Excellence in Leadership Award recipients were:

Pamela Wideman ’06 MPA, was recognized in the category of public service. She is the director of Charlotte’s Housing and Neighborhood Services Department and serves as vice chair of the North Carolina Department of Transportation and Affordable Housing Committee. Wideman was recognized as one of the Top 10 “2017 Behind the Scenes Newsmakers” by the Charlotte Business Journal.

Robin Green ’96 is the learning community administrator at Charlotte-Mecklenburg Schools. She leads the CMS Alternative to Suspension Program with Mecklenburg County Parks and volunteers with Hope Haven. She was recognized recently in “Who’s Who in Black Charlotte.”

B.J. Williams ’10 was recognized in education. He is dean of students and new teacher coach at Eastway Middle School, where he was named the 2018 Teacher of the Year. Williams coaches multiple sports teams and recently completed his term as a board member of the Young Alumni Chapter.

Khaleel Loyd ’14 was honored for entrepreneurship.  He is CEO and executive producer of Loyd Visuals. He is a mentor in Charlotte-Mecklenburg Schools, has been a participant in the Emerging Business Leaders Program and volunteers with his fraternity, Alpha Phi Alpha. He was recognized for his community service in 2017 with the Charlotte Mecklenburg Black Chamber of Commerce’s 30 Under 30 Award.

Judge Linda Bratton Haynes ’80 is judge of Dekalb County (Ga.) Juvenile Court, presiding over the first juvenile drug court in the county. While a law student at Georgia State, she wrote a brief on psychiatric patient privilege that was argued before the Georgia Supreme Court. Haynes has received several awards, including the Tupac Shakur Foundation’s Women in Progress Award.

Derek Ross ’05 is founder and CEO of the D2 Group. He has worked with businesses to elevate their brands. A contributor for Sports Destination Management, Ross is co-creator of the podcast, “Can I Get a Repost.” He is a certified mindset and business facilitator.