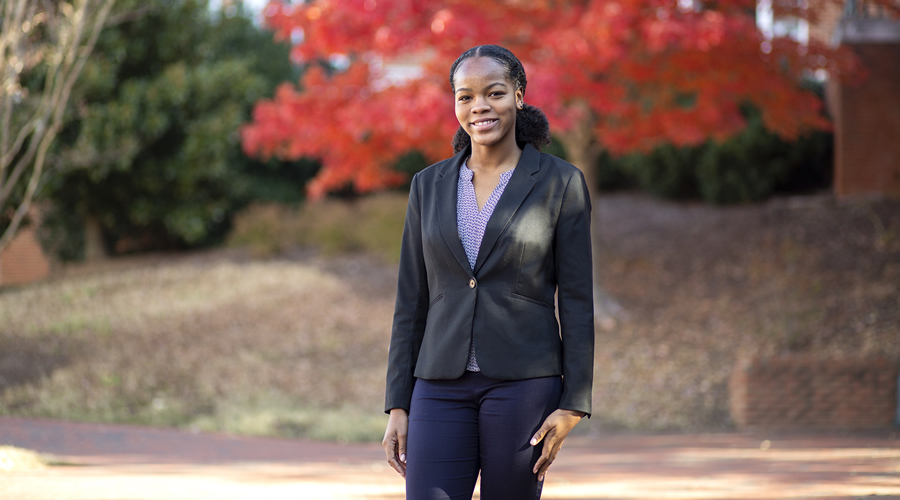 Senior Neariah Mandisa-Drummond is the 2019 recipient of the John H. Barnhill Civic Trailblazer Award. Since 2011, North Carolina Campus Compact, a statewide network of colleges and universities, has presented the award annually to one college student in the state who has created and led innovative projects that address community needs.

While at UNC Charlotte, Mandisa-Drummond has developed a passion for serving people as a member of the institution’s inaugural class of Bonner Leaders. Along the way, she combined community service with her academic studies, motivated her peers to join in the work and created new programs and partnerships that will continue to engage students and impact communities even after she leaves Charlotte.

In her first year as a Bonner Leader, Mandisa-Drummond worked at Friendship Trays, a meal-on-wheels program for people in Charlotte experiencing food insecurity. Mandisa-Drummond worked with her team to research the possibility of developing a food rescue program connected to Friendship Trays. In her second year of volunteering at the nonprofit organization, she used her skills as a communications major to work on a social media and video marketing strategy.

Mandisa-Drummond also has committed herself to active citizenship, building bridges between the campus and greater Charlotte community. In her freshman year, Mandisa-Drummond and a small team of Bonner Leaders, planned an event on campus that brought students and local law enforcement officers together to discuss building trust following the death of Keith Lamont Scott in September 2016. Furthermore, she submitted a Chancellor’s Diversity Challenge Fund grant with the intent of having a safe space for conversations among UNC Charlotte campus police, Charlotte-Mecklenburg Police Department and UNC Charlotte students.

Through most of her undergraduate career, Mandisa-Drummond has sought to enhance the culture of civic engagement on campus. She has been an active member of the Civic Action Planning (CAP) group, a committee of faculty and administrators from across campus responsible for designing strategies to strengthen engaged scholarship on campus, build partnerships with community organizations and integrate civic learning into the curriculum.

Tamara Johnson, director of engaged scholarship and Bonner Leaders Program co-director at UNC Charlotte, nominated Mandisa-Drummond for the award, stating “because of her leadership in the Bonner Leaders Program and on campus, I asked Neariah to serve as a student voice on the UNC Charlotte CAP group. The CAP committee met every other week at 8 a.m. for two semesters. Neariah exceeded our expectations as a member of this committee, and her perspective was so valuable to our strategic planning. Her work helped to institutionalize best practices in civic engagement at UNC Charlotte.”

In order to elevate the culture of civic engagement at UNC Charlotte, the Bonner Leaders decided to design and implement the Gold Rush Day of Service during the Week of Welcome for incoming students. Over the summer, Mandisa-Drummond led the planning team for the initiative. She secured volunteer projects with community partners, recruited participants and publicized the event on social media. As a result of her efforts, 75 first-year students were involved in the Charlotte community.

“For the past three years, I have gotten to know Neariah as a scholar and as a leader; she is intellectually curious, creative, open-minded and dedicated to matters of social justice and community engagement. There is no doubt in my mind that she possesses a passion for creatively addressing the needs of her community. As a student, she is more than capable of conducting her work successfully. I firmly believe that Neariah will continue to build on the academic success and civic leadership she has already achieved as a Bonner Leader,” stated Johnson.

The Barnhill Award is named for John H. Barnhill, who founded innovative student service programs while a student at Elon University and who later became the founding executive director of North Carolina Campus Compact.