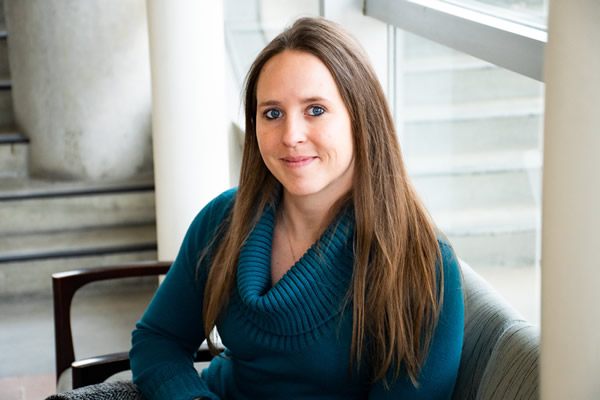 Alicia Bartosch ’05, ’06 MACC may be new as the assistant controller of compliance, but she’s no stranger to UNC Charlotte; the University has been woven in and out of Bartosch’s life story and family tree.

Before ever stepping foot on campus, her Niner roots were already established. Her mother graduated from UNC Charlotte’s nursing program in 1975. Early on, Bartosch knew where she wanted her academic journey to start. UNC Charlotte was her first choice.

“Everyone was trying to go to the traditional big name schools,” said Bartosch, “but I didn’t want to be just another number—I wanted to stand out. I knew I would have that opportunity at UNC Charlotte.”

With only 14,000 students at the time she enrolled, Bartosch became involved in multiple aspects of campus life, including being on the cheerleading team, joining Beta Alpha Psi and maintaining her status as a John Fraley scholarship recipient for four years as an undergraduate. A bachelor’s and master’s degree in accounting, certified public accountant (CPA) licensure and four professional roles at UNC Charlotte later, Bartosch is still doing what she set out to do in the very beginning: stand out and help others do the same.

“I’m the type of person who builds relationships, finds connections between people and encourages perspective to spur continuous learning,” she said. “Too often people are waiting for permission to be who they are or excel in certain areas. You have to be willing to try and make mistakes. It’s the only way you’ll grow.”

Bartosch has a number of opportunities in her role. One of them is being able to interact with employees around campus. In her outreach function, she leads training efforts and oversees advisory panels and executive committees that solicit input to improve processes and customer service. These programs are designed to engage users at the strategic and functional levels in order to properly align financial and department goals of the University.

UNC Charlotte has given Bartosch more than an education and career; it enabled her to meet her husband, Geoff ’04, ’06 M.S., who completed bachelor’s and master’s degrees in mechanical engineering. The couple met during their first year, and today, they have three children, a son Hudson, and identical twin girls, Adelynn and Lydia. Bartosch and her husband keep Niner pride alive in their family lives. Since becoming football license seat holders for UNC Charlotte’s football team in 2013, they tailgate and take their kids to almost every game. As UNC Charlotte’s athletics programs have grown, Bartosch believes the University’s future is bright.

“Look at how far we’ve come. The fact that we’ve doubled in size since I was a student says something. I have so much love and pride for this campus,” she said. “It’s given me so much more than an education, a future and a family. I wouldn’t doubt this would be a place my son or daughters will consider when they get older. I think of Charlotte as the crown jewel, and I don’t plan on ever leaving Charlotte.”