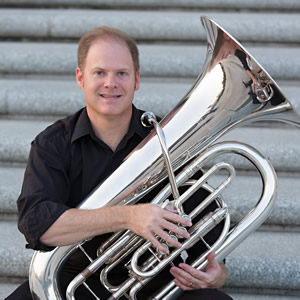 Joseph Skillen will become the next chair of the Department of Music, effective July 1. He comes to UNC Charlotte after 22 years at Louisiana State University, where he has served in numerous capacities, most recently as the Galante Endowed Professor of Tuba and Euphonium and associate dean for graduate studies in music and theatre in the College of Music and Dramatic Arts.

Prior to Louisiana State University, Skillen was a principal tubist in American orchestras, and he has performed with touring ensembles across the United States, Europe and Asia. As a Fulbright Scholar, Skillen studied in Stockholm, Sweden, at the Royal Music Academy and performed as a substitute tubist with the Royal Stockholm Philharmonic Orchestra. His performances have been broadcast on National Public Radio and on Sweden’s National Radio.

“We are thrilled to welcome Dr. Joseph Skillen as next chair of the Department of Music,” said Brook Muller, dean of the College of Arts + Architecture. “He is a highly respected musician with a loyal student following. His leadership is characterized as inclusive and entrepreneurial as he advances the intellectual culture in which he operates. Dr. Skillen seeks to engage the department in a mission-driven process of program development, recognizing that UNC Charlotte music has a distinct identity that can be celebrated and furthered. He also brings significant experience developing interdisciplinary programs and opportunities, the ‘Music to Medicine’ initiative providing one example among many.”