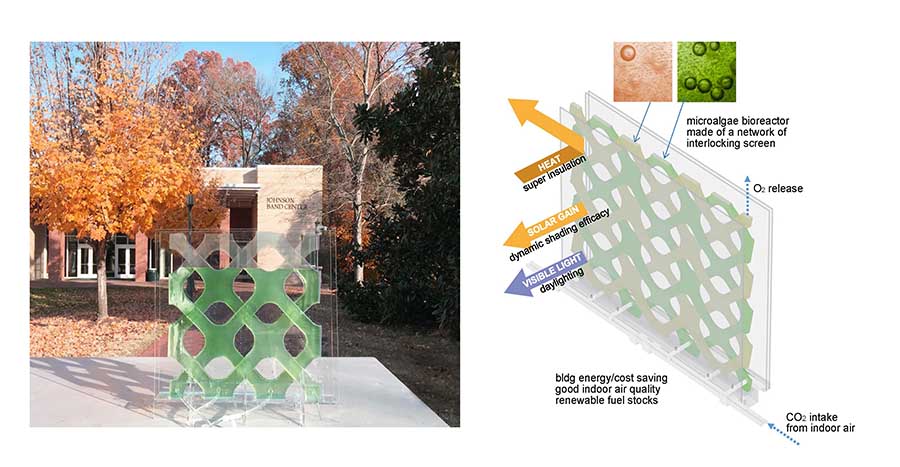 A long-term multidisciplinary research project by the Integrated Design Research Lab (IDRL), under the direction of Associate Professor of Architecture Kyoung-Hee Kim, has received a Small Business Technology Transfer Phase I (STTR) grant from the National Science Foundation (NSF).

The NSF STTR program funds research and development to help transform scientific discovery into products and services with commercial potential and/or societal benefit.

The $225,000 grant will support a new stage in the development of a microalgae façade system that Kim and her team, which includes IDRL Research Fellow Chengde Wu and Matthew Parrow, an associate professor in the Department of Biological Sciences, have been studying since 2012. It is the latest of several research grants the project has received, including a 2017 AIA Upjohn Research Initiative Grant ($30,000) and a 2019 NSF Innovation Corps (I-Corps) grant ($50,000). Collaboration with Ventureprise, the innovation and entrepreneurship center in Research and Economic Development, has provided the team with resources and expertise as the project has developed.

In this phase of the research, the team will develop a microalgae window for retrofitting low-performing commercial windows on office buildings constructed before 1980. The windows will incorporate a network of screens filled with microalgae, which serve multiple beneficial functions, including carbon sequestration, solar shading and thermal insulation. Not only will that result in lower energy costs and cleaner indoor air, but the algae can be collected and converted into biofuel, producing a renewable energy source.

Housed in the College of Arts + Architecture in the Storrs Building, the Integrated Design Research Lab is an interdisciplinary research platform for integrating architecture design and building technologies. Kim, who became IDRL director in 2018, is a registered architect; her expertise lies in performance-based design, innovative building systems integration and high-performance facades as a way to improve the sustainability of the built environment.