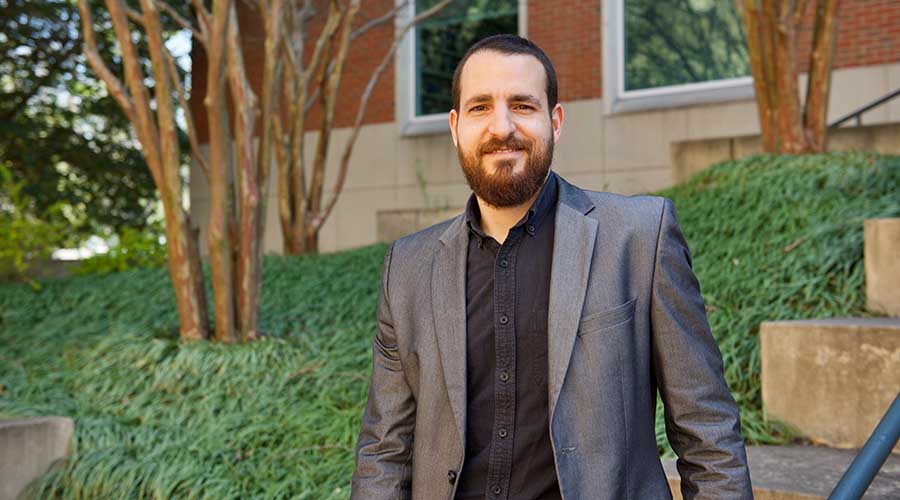 Associate Professor of English Juan Meneses will spend four weeks this summer in residency at the National Humanities Center in the Research Triangle Park completing the third chapter of his second book, tentatively titled “Denizens! On Foreigners, Visitors and Other Outsiders.”

Meneses will join a select group of about 40 scholars from across the nation who were chosen to do research in residency at the center, with the timing guided by the state’s protocol on COVID-19.

Through the National Humanities Center’s program, faculty experience a concentrated period of supported research in which a team of librarians assists scholars to draw on resources from the extensive holdings of surrounding universities as well as collections housed in libraries and archives around the world.

For his book project, Meneses is considering the idea of denizenship, as reflected in a number of works of literature, film and other creative media. He seeks to reimagine the concept of denizenship in the context of today’s world.

“A notion first used in medieval England, denizenship was employed to describe the status of foreigners who nonetheless enjoyed certain legal and political rights in the country,” he said. “Denizenship designated a difference in status with respect to citizens enjoying full rights while, simultaneously, blurring the line that divides citizens from figures such as the ‘alien national’ or the ‘non-native.’”

In particular, Meneses will look at ecological dimensions of this issue, investigating how environmental questions exert important pressures on belonging, national identity and global solidarity, among other aspects. The chapter is titled “A World Apart: Environmental Matters and Eco-Nationalism.”

“I understand denizenship to work against the grain of how people experience inclusion and exclusion with respect to the communities into which they are accepted—or not—and in which they live,” he said. “Analysis of a number of novels and films, then, will give shape to my theorization of denizenship and reveal how it responds to some of the most pressing political and cultural challenges of both the present and the future.”

The book will investigate key themes that demonstrate how denizenship allows people to name ways of being in the world in historical tension with each other as manifested by categories such as the colonial settler and the migrant.

“This is an important first step in the book’s trajectory because it sheds crucial light on how power—colonial, financial or otherwise—confers a special status to certain individuals,” Meneses said. “The book, then, continues to explore other matters that, revolving around the idea of denizenship, extend its meaning into conceptual terrains that allow us to explore larger questions about issues such as the future of human life on the planet.”

Meneses is the author of a number of articles and of the book, “Resisting Dialogue: Modern Fiction and the Future of Dissent” (University of Minnesota Press, 2019). He is working on another book, a collection of key terms in the style of Raymond Williams’s landmark “Keywords: A Vocabulary of Culture and Society.” Tentatively titled, “Z to A: A Vocabulary for the Post-Political Era,” it will provide a full, critical picture of some of the most important social, cultural and historical issues that define the current post-political moment.

A teacher of world and Anglophone literature and visual studies, Meneses also is a translator and an affiliate faculty in Latin American Studies. Additionally, he is editor of H-Empire, an international digital organization of scholars and teachers in the humanities and the social sciences dedicated to the study of empires, colonialism and decolonization.