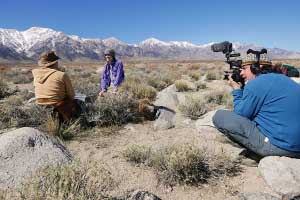 A virtual solo exhibition of new work by Associate Professor of Art Marek Ranis is on view through Toshkova Fine Art through July 26. The “Liminal” series includes seven large paintings on linen that depict the cracking and weathering of boulders, an artistic response to current research on how climate influences the mechanical breakdown rates of surface rocks.

Ranis is part of a team led by Missy Eppes, professor of geology and earth sciences, which is conducting the research project “Quantifying climate-dependent subcritical cracking and mechanical weathering over geologic time.” The project is funded by a grant from the National Science Foundation. As the project’s artist-in-residence, Ranis is documenting and interpreting the discoveries of the geologists and mechanical engineers in the field.

In March, Ranis and the other researchers went to Owens Valley, California, an area situated within the Great Basin, east of the Sierra Nevada Mountains and west of the Inyo Mountains, where Ranis documented the research with video and photography. Shortly thereafter, the COVID-19 epidemic shut down much of the world, not only delaying their next-scheduled research expedition to Israel but also “placing all of us in the crack of time, in the ‘Liminal’ space of some despair and confusion,” Ranis said.

The ‘Liminal’ series paintings, which he created over the next three months became an interpretation of the geologic phenomena and a metaphor for the COVID-induced fracturing of society.

“Rock cracking or ice cracking seem to be a right symbol for the time we are in,” he said.

Ranis has been researching and portraying the effects of climate change for almost two decades. Focusing primarily on the Arctic region, he has created a diverse body of work through residencies in Iceland, Greenland and Alaska, where he is curator at large at the Anchorage Museum.