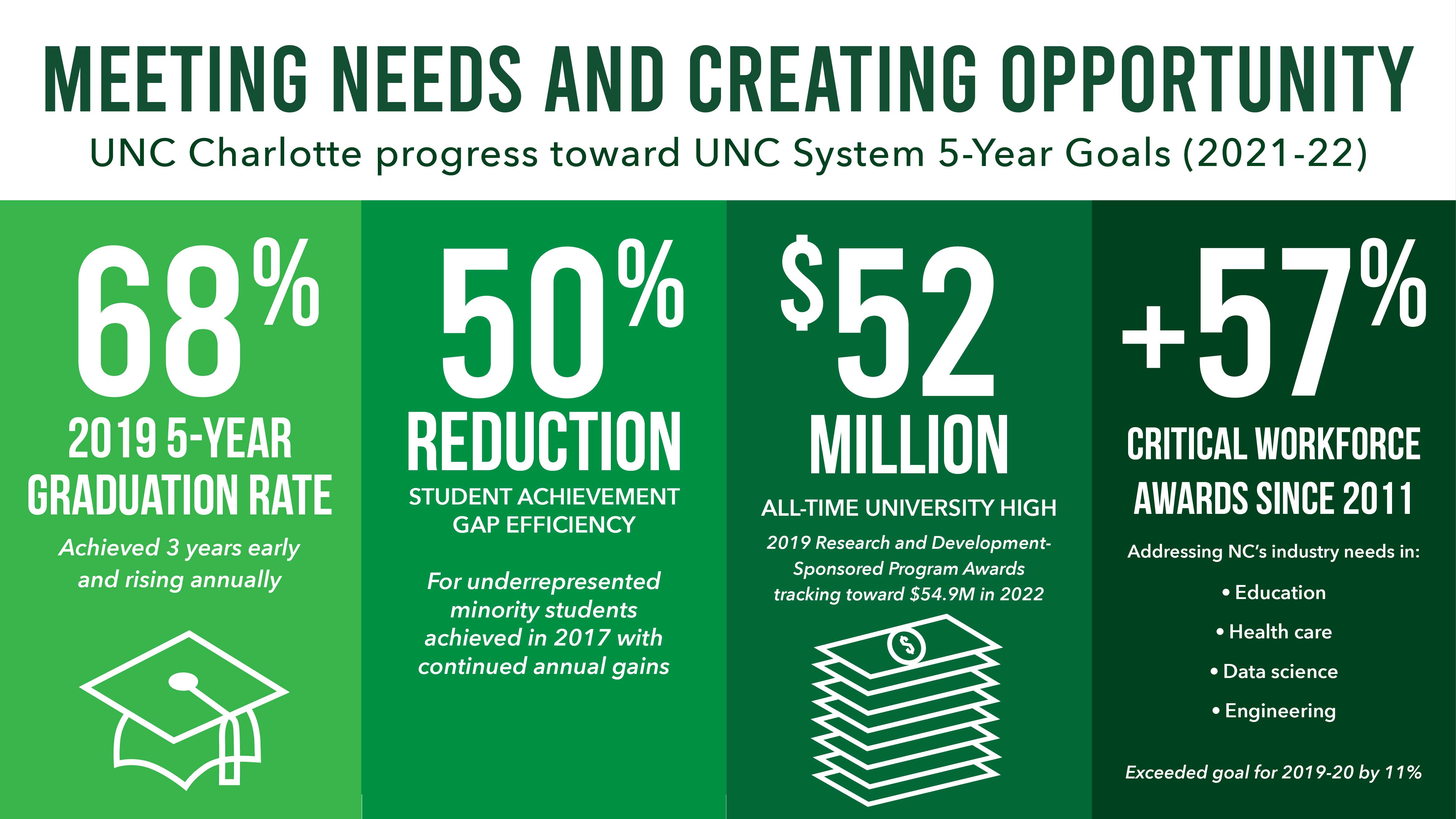 UNC Charlotte is meeting or exceeding goals related to student access and success, according to performance metrics released by the University of North Carolina System (UNC System) that align with goals for member institutions outlined in the UNC System’s 2017-22 Strategic Plan. UNC Charlotte is one of three member universities to meet or exceed annual targets in all five of their priority metrics for 2018-19, the most recent academic data year.

“As North Carolina grows and becomes more diverse, a quality, affordable education is more important than ever before,” said Joan Lorden, provost and vice chancellor for Academic Affairs. “Changes in our economy and our society are demanding more of our citizens: broader skills, deeper knowledge and greater competitiveness. UNC Charlotte recognizes the importance of a college degree for careers of the future, and we want every student to finish what they start.”

Delivering a high-quality academic experience is a priority for Lorden and her leadership team. Resources that guide students’ educational journeys and support their ability to persist through graduation highlight the University’s efforts, and have led a steady march toward achieving goals set by both UNC Charlotte and the UNC System:

Between 2010 and 2018, UNC Charlotte’s five-year graduation rate jumped from 59 percent to nearly 68 percent, exceeding the current institutional goal of 64.8 percent and earning national recognition from the Association of Public and Land-grant Universities (APLU). More UNC Charlotte graduates are completing their degrees faster than the national average, which stands at 58 percent for U.S. students who began college in fall 2012 and who had completed their degree six years later, according to the National Student Clearinghouse Research Center.

Undergraduate degree efficiency, a measurement of bachelor’s degrees awarded per 100 full-time equivalent students and ensure that students save tuition dollars and enter the workforce more quickly has risen to nearly 26 percent, outpacing the UNC System’s benchmark of 23.5 percent.

The path to accomplishment

A comprehensive and coordinated array of student-centered programs, services and initiatives address the needs of UNC Charlotte’s diverse student population, a large percentage of whom are first-generation college students. These include:

A work in progress

The UNC Charlotte Campus Plan for Access, Diversity and Inclusion guides progress for students who represent the wide breadth of gender identities, races and ethnicities, faith traditions, nationalities and other social categories and backgrounds. Programs support student success, including academic engagement opportunities for traditionally underserved minorities and first-generation students through the Office of Academic Diversity and Inclusion. The University Transition Opportunities Program (UTOP) has offered pre-college summer programming and a learning community experience to underrepresented minority students and others for three decades.

Through the APLU-coordinated Student Experience Project, the University will develop interventions to redress equity gaps of underserved students. Beyond UTOP, which reached a record number of participants in 2018, the University offers a summer bridge program to support roughly one-third of first-year students, offers Building Better Brothers, focused on the needs of Black male students, and IGNITE for underrepresented female students

Underway are the Atkins Library Diversity Book Club and the “Know Me” project, which allows students to indicate their preferred name for ID cards, diplomas and other applications with the intent to extend this personalization to class rosters and grade report.

“We enroll and graduate one of the most diverse student bodies in the UNC System; last fall, students who identify as members of racial/ethnic minority groups comprised 37 percent of our student population,” said Lorden. “UNC Charlotte is committed to improving student achievement, and these efforts benefit all students, particularly students of color.”