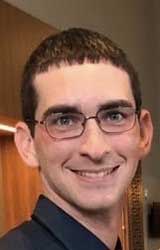 Dignan, a senior biology major, transferred to UNC Charlotte from Coastal Carolina Community College. He selected UNC Charlotte to continue his studies as he related to the school’s origins, being established to serve the educational needs of veterans.

“Also, UNC Charlotte’s having an active veterans group reassured me that I would be able to transition well from active duty service to student,” said Dignan.

In addition to majoring in biology, Dignan plans to add an accounting degree. An avid conservationist, Dignan is interested in working for the Walt Disney Company, known for its animal conservation efforts.

“I believe if we do not start to address the environmental concerns related to the loss of animal habitats, the Earth will face dire consequences,” he said.

Dignan served 11 years as an active duty rifleman in the U.S. Marine Corps prior to transferring to UNC Charlotte in spring 2018.

Membership into Alpha Sigma Lambda - Gamma Rho is by invitation only; UNC Charlotte’s chapter has inducted members and awarded scholarships for more than 20 years. Students must have 24 credit hours earned at UNC Charlotte, a minimum 3.5 PGA, be 25 years of age or older and pursuing their first undergraduate degree.