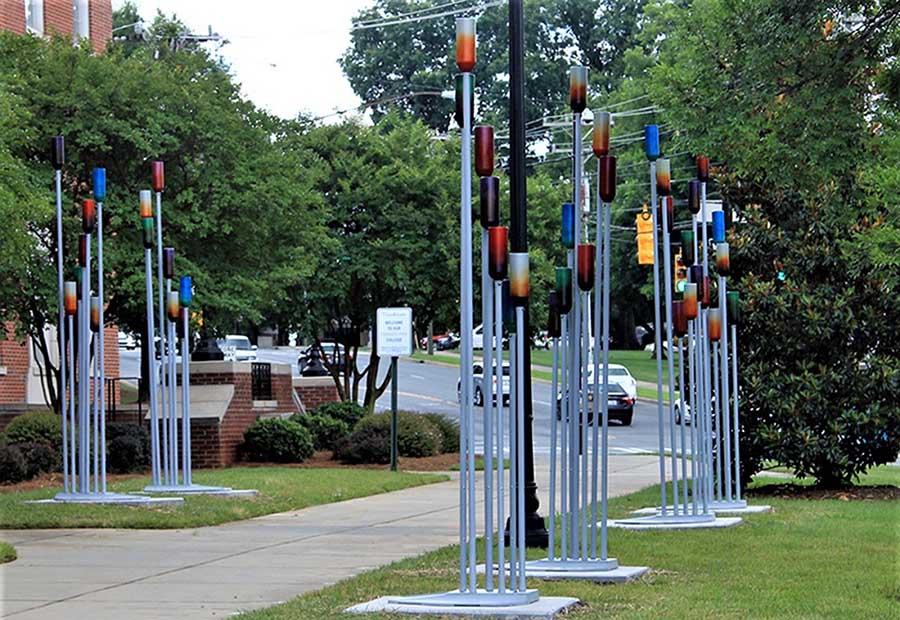 Two large-scale public art works by Lecturer Keith Bryant are prominently on view on the main campus of Central Piedmont Community College. “Procession” and “Journey” were installed at the end of June and will remain on loan for one year.

“Procession” is located in front of the Overcash Building along Kings Drive. Built in 2018 and exhibited first at the Turchin Center for the Visual Arts at Appalachian State University, the majestic series of poles was crafted from materials found in the scrap yard, including old fire extinguishers.

“’Procession’ came out of musing on the ceremonial entrances and exits of funerals, weddings, graduations and other formal/semi-formal gatherings,” said Bryant.

The single sculpture “Journey” is located by the Citizens building on Charlottetown Avenue. It dates from 2007 and represents a change in how Bryant thought about making art at that time.

“It is a shift from very planned and controlled to a more organic response, where chance has a larger role in how I think about artmaking,” he stated.

Bryant taught at Central Piedmont before coming to UNC Charlotte in 2000. His instructional focus is ceramics, sculpture, and three-dimensional design. His work has been exhibited nationally and is in corporate collections throughout the southeast and mountain states.

Central Piedmont will host an exhibition of Bryant’s work in the Overcash Gallery, Oct. 14 through Dec. 10. The solo show, “Reconvene,” will include works from the last six years that explore deep personal loss in three-dimensional metaphorical forms.