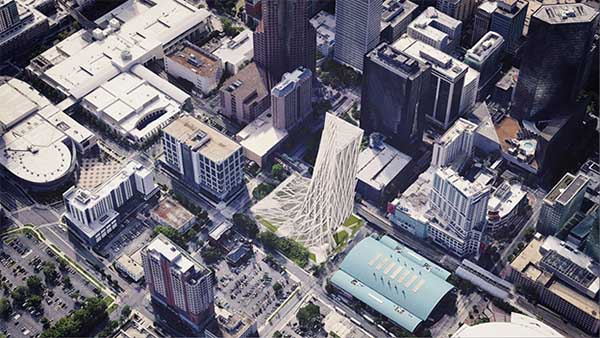 A team of graduate students in the School of Architecture placed third in the 2020 Steel Design Student Competition, an annual contest presented by the American Institute of Steel Construction (AISC) and the Association of Collegiate Schools of Architecture (ACSA).

This national competition recognized 18 exceptional projects, in two categories, that explore a variety of design issues related to the use of steel in design and construction. Students Ashkan Radnia, Gavin Reeb, and Spencer Sparagna, under the mentorship of professors Kyoung-Hee Kim and Liz McCormick, received third place in the “Open” category for their project “Urban Roots.” The “Open” category challenged students to select a site and building program using steel as the primary material.

“Urban Roots” is an urban vertical farming structure that proposes to combine office and greenhouse space into a single project that brings food production directly into the city center. The project is designed for a real in-fill site in uptown Charlotte, across the street from the Charlotte Transportation Center.

“It is important for us to provide a program for Charlotte (one of the fastest-growing cities in the U.S.) that not only aids in the growth of food in the city but also bridges the gap between agricultural and urban workspaces,” the team wrote in its project description. “These offices would be occupied by companies that specialize in food research, innovation and production.”

Growing food in the “Urban Roots” greenhouse spaces would produce up to 30 percent greater yield than conventional farming, the students predict, while eliminating the use of pesticides and significantly reducing the amount of water needed. Among their suggested crops are strawberries, tomatoes, eggplant, lettuces, cucumbers and mint.

"By growing food at the source, we solve several important issues in the agriculture industry," noted the team.

New Master of Urban Design student Jacob Lyons also placed in the competition, winning third place in the "Urban Food Hub" category for his project, “Pesce Plaza,” completed while he was a student at Louisiana State University.