Rauch earned degrees in zoology and literature, and he studies and writes about dolphins. Schneider studies honey bees and their hive behavior, and Light researches gibbons and other primates. 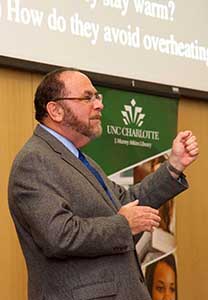 Rauch: Dolphin societies are predominantly matriarchal, so a good deal of the decision-making rests in the hands (flippers) of the older and more established females. The communication and social skills of dolphins are very complex and extremely subtle. Dolphins can communicate by whistles that allow them to mediate information about who they are and where they are.  Of course, we are a long way from understanding what each whistle means.  Clearly though, dolphins make precise decisions, whether it has to do with synchronous swimming or well-regulated hunting.

What are some of the situations they face when they need to have group decision-making?

Rauch: Dolphins need to engage in group decisions while foraging for food as well as when moving locations. Given that there can be any number of dolphins in a pod, averaging around 15-25, but sometimes as many as 100-150, group coordination and communication is important. The older and more experienced dolphins must agree on the time of movement and the direction of movement.

Dolphins must also work quickly and alertly – in concert – if predators, such as sharks, are nearby. In these scenarios, it is possible that dolphins release alarm chemicals in the water to alert others – quietly and without drawing attention to themselves or their young – that danger is nearby

Rauch: Dolphins can be very “outspoken.” Disagreement is signaled by tail slaps which may simply be on the surface of the water or, if there is need, a slap directed bodily at another dolphin. Other gestures of disagreement include “raking” when one dolphin runs its teeth superficially – but firmly – against the body of another dolphin, or a person. I’ve been raked, and it doesn’t hurt, but you do feel it. 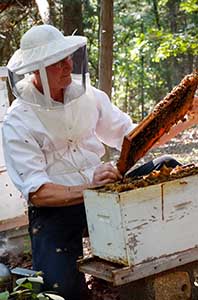 Schneider: I study honey bees, and many decisions are made at the “colony level” through decentralized, collective decision-making processes. Examples include choosing a new nest site by a honey bee swarm, organizing the nest into brood rearing areas and food storage areas, preparing for long-distance travel, comb building, social immunity, etc.  In all cases, individual bees act on only local information using innate rules. The colony level patterns and decisions then emerge collectively.  There is no centralized control of the decision-making processes.

What are some of the situations they face when they need to have group decision-making?

Schneider: Honey bee societies are organized very differently from mammalian societies, in that they are not based on a dominance hierarchy, and there is little overt aggression or conflict among workers within a nest. There is not conflict and disagreement; rather, there are differences of opinion. For example, when a swarm is searching for a new nest site, scout bees individually fly out to find possible cavities, and they assess the quality of the cavity using innate rules. If they like what they find, they then return to the swarm and perform waggle dances on the swarm surface to communicate to other workers the location of the cavity they found.  The dance followers can then leave the swarm and investigate the cavity, and if they like it too they return and perform their own waggle dances for it to recruit others. 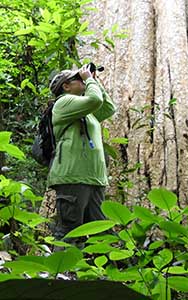 Light: I study white-handed gibbons, a species of small apes that lives in the tops of the trees in forests throughout parts of Thailand and Malaysia. We used to describe gibbons as “monogamous,” but now we know they live in much more complicated social groups with some individuals living together throughout their lives, yet others might re-pair several times either because of the death of their mate or because either one of the pair deserts the group to seek other opportunities.

Based on my research and the research of other scholars, we also know now that this species of gibbon can sometimes live in groups with multiple adult males. However, the groups are very cohesive regardless of the composition. The group travels together as they range through their territory looking for food and patrolling the boundaries.

When the group moves to a new location, that decision is made by the adult female. This is thought to be based on the female’s higher nutritional needs due to pregnancy and lactation. The female will lead the group from feeding tree to feeding tree, quite deliberately, following regular pathways through the canopy of the forest and heading intentionally to the next food resource.

Since the female is focused on finding food resources, the male follows along and opportunistically looks for neighboring groups. If they come across one (usually only when they are close to the boundary of the territory), the male takes the lead in trying to scare away the other group, using loud vocalizations and swinging aggressively through the trees in sight of the other group. If the female helps, she just vocalizes from wherever she is feeding.

What are some of the situations the they face when they need to have group decision-making?

Light: For gibbons, this is almost entirely about defending the territory against other gibbons. Gibbons are territorial, so they stay in one place and do not need to plan for moving anywhere new as a group.

Some of my research has shown that even if the membership of the group changes, the territory stays the same.

The most common situations where I have observed group members working together were those in which the group came across another gibbon group and they had to defend the territorial border, which is likely always in dispute.

Besides that, gibbons also seem to work together when encountering other species that might want their food or pose a threat to their safety.  The gibbons differed by group as to how they reacted to these potential food-thieves, with some groups avoiding the macaques but coexisting with the langurs peacefully and other groups the exact opposite.

Light: Despite the description of an idyllic lifestyle swinging from fruit tree to fruit tree, there is occasional conflict in gibbon groups. This might be because the male wants to mate and the female is not interested. In this case, she just keeps turning away until he gets tired of trying. If he is really persistent, she will likely smack him with increasing intensity.

But in the groups I spend the most time observing, the extra males cause a bit of additional conflict. Interestingly, this was not about mating opportunities. One of my groups, Study Group D, had three males of breeding age. In one week, I observed the adult female (Daisy) copulate with all three males (Denison, Darwin, and Downey). None of the males fought with one another or seemed to be upset. But after that, whenever Denison or Downey entered the same tree as Darwin was in, he made a high-pitched vocalization and ran over to them and hugged them.

Gibbon pairs sing coordinated duets that are thought to advertise their pair-bond and for the first several months I observed group D, Daisy sang with Denison. After the week of multiple copulations, Denison and Darwin took turns singing with her and I assumed Darwin would take over as the primary male.

But when the infant was born, Downey started duetting with Daisy; Denison started spending more time at greater distances from Daisy; and Darwin started this squeak-hugging behavior directed at Downey. I never saw it in any of the other three groups I observed. In the months that followed, Darwin began spending time away from the group but would sometimes go off with one of the other males.

Daisy was never left alone with the immature individuals. There is no literature to support this yet, but it seemed to me that the males were wanting to do something different from feeding and because there were so many of them, they finally had a chance to travel independently. There was no direct conflict but it does seem to me that whenever there is a “difference of opinion” on what to do or where to go, gibbons tend to choose to temporarily go their separate ways for a few hours, joining back together before the end of the day or if there is a need for teamwork, such as when a neighboring group gets too close to invading the territory.