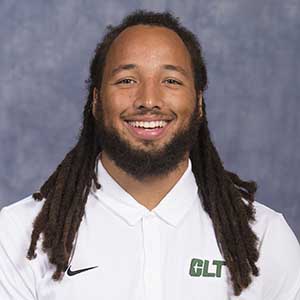 Charlotte 49ers redshirt senior defensive end Tyriq Harris is one of 12 finalists for the prestigious National Football Foundation’s 2020 William V. Campbell Trophy, presented by Mazda. The honor is college football’s premier scholar-athlete award that annually recognizes an individual as the absolute best in the nation for his combined academic success, football performance and exemplary leadership.

“Tyriq is the ultimate student-athlete and represents everything that is right about college athletics,” said 49ers Director of Athletics Mike Hill. “His intelligence, work ethic, athleticism and leadership skills make him truly elite, yet he remains remarkably humble. We celebrate this well-deserved honor and are so proud of how he represents the Charlotte 49ers.”

Often referred to as college football’s “Academic Heisman,” the Campbell Trophy was first presented in 1990 while the NFF National Scholar-Athlete Awards date to 1959, making this the program’s 62nd year. Harris is the seventh player in Conference USA history to be named to the NFF Scholar-Athlete team and the first since 2014. He is the first defensive player from the league to earn this recognition.

“This is such a huge honor and one that could not be any more deserving,” 49ers head coach Will Healy said. “I’ve never met anyone like Tyriq, let alone been able to coach anyone like him. Some days, it feels like he coaches me. He inspires me, his teammates, our coaching staff and everyone who works in the building. He’s the standard on and off the field, pure and simple.”

Harris was chosen as a finalist from a record 199 semifinalists from among all NCAA Divisions and the NAIA.

“Tyriq is the consummate student-athlete and a tremendous representative not just for the 49ers but for collegiate athletics as a whole,” said Mark Verburg, director of the 49ers Athletic Academic Center. “We are proud of his incredible achievements in the three key areas of student-athlete life: academics, athletics, and community service. He has already graduated cum laude with a B.S. in Biology and is now pursuing a second degree in business and he is a tireless contributor to our community service efforts. Beyond the accolades and statistics, Tyriq truly is a special individual whose infectious smile and eternally positive personality inspire all who interact with him on a daily basis.”

A three-time team captain, Harris was named the Conference USA Football Scholar-Athlete of the Year in 2018-19, before missing last season’s activity. He also earned Academic all-District 3 honors from CoSIDA in the fall of 2018 and was selected to C-USA’s all-Academic Team in 2017 and 2018. He has posted a GPA of 3.0 or higher in each of his 10 semesters, including four semesters on the Chancellor’s List with a GPA of at least 3.80. He has been named to the C-USA Commissioner’s Honor Roll in each of his five years.

A four-year starter, Harris was named Honorable Mention all-Conference USA in 2018 and was a 2016 C-USA all-Freshman team choice. Phil Steele named him a third-team all-Conference USA player following the 2018 season. He currently ranks seventh in school history in career tackles, fifth in career tackles for loss and third in career sacks. He has started the last 37 straight games in which he has played in his 40-game career. He is the first player in school history to be named captain in three straight seasons (2018, 2019, 2020).

A three-time team captain, Harris was named to the Wuerffel Trophy Watch List, awarded to college football’s top community servant, in 2019 and 2020. Active in community service projects, Harris has volunteered at special events for numerous organizations, including the YMCA Miracle League All-Star Game, the Tim Tebow Night to Shine, Dream on 3 visits to campus and the Harrisburg (N.C.) 4th of July Parade.

An officer for two years on the Student-Athlete Advisory Committee (SAAC), he has received the SAAC’s “Mr. 49er” award recognizing involvement and participation for three straight years. He has volunteered at Weddington Hills Elementary, Kings Kitchen, YMCA Healthy Kids Day and Elevation EKidz and visited Devonshire Elementary School. He has worked at on-campus blood drives and dance marathons and been involved with the #SAACCares holiday drive and distribution to Project 658. In 2018 and 2019, he was selected as an APPLE Training participant, attending the national APPLE Conference that explores methods to combat alcohol and drug abuse on campus.

In 2019, he was a team captain as Charlotte advanced to its first-ever bowl game. The 49ers went 7-6 on the season and earned a spot in the Makers Wanted Bahamas Bowl.