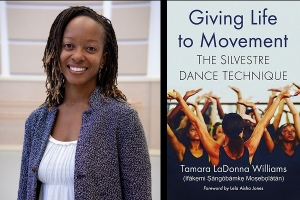 A new book by Assistant Professor of Dance Tamara Williams explores Silvestre Technique, the contemporary dance technique founded by Rosangela Silvestre as an extension of the spiritual dance traditions of enslaved Africans in Brazil. “Giving Life to Movement: The Silvestre Dance Technique” was published recently by McFarland.

Silvestre, a native of Salvador da Bahia, Brazil, trained broadly in American and European modern dance techniques as well as traditional African-Brazilian dance and dance forms in India, Egypt, Senegal and Cuba. In the early 1980s, she began to develop and teach the Silvestre Technique, which has evolved into a rich and rigorous methodology rooted in African tribal dance practice.

In her book, Williams, who has studied extensively with Silvestre in Brazil, situates the dance technique within the spiritual and cultural history of African Brazilians, and in particular, the political and social mobilization of Black Brazilians in the 1970s in Bahia. She then thoroughly investigates and analyzes the theory and practice of Silvestre Technique, both codifying the movement and highlighting its connection to resistance, empowerment, and healing.