On Sunday, April 25, six UNC Charlotte dance students heard a sound that has been all too rare in the past 13 months: applause from a live audience. The students – Leah Adams, Tabitha Baker, Neha Kissler, Erika Rush, Kenny Raynor and Allie Schultz – gave four performances of "An Homage to Ancient Egypt" for enthusiastic viewers at the North Carolina Museum of Art (NCMA) in Raleigh.

Specially choreographed to accompany the museum’s exhibition, Golden Mummies of Egypt, "An Homage to Ancient Egypt" was the brainchild of associate professor of Dance Delia Neil.

It was not the first time that UNC Charlotte dancers performed at the state’s largest art museum. In February 2020, Neil took a group to Raleigh to perform her piece "Frida’s Faces," in conjunction with the NCMA’s blockbuster exhibition of works by Frida Kahlo. That production was a great success, and afterwards the deputy director of the museum invited Neil to create a new work specifically for Golden Mummies of Egypt. This time, Neil and her students had to prepare during a pandemic.

"I decided to go forward with the project, despite COVID restrictions, for my own personal reasons and for my dance students," Neil said. "As a creative person, having projects to work on creatively is your life's blood, so I needed to pursue this opportunity even though there would be challenges."

The challenges were many, including numerous safety protocols and limited rehearsal time.

"Typically when you are creating work, you would have at least two or three rehearsals a week," said Neil. "But due to COVID restrictions and the use of the studios’ off hours, one day a week was all the time we had to create the work."

The NCMA’s signature exhibition of the year, Golden Mummies of Egypt presents eight gilded mummies and more than 100 related objects, such as papyri, jewelry, and ceramics. Neil wanted the dance piece to be as visually stunning as the exhibition, so she solicited the help of Associate Professor of Lighting Design David Fillmore, who had worked with her on "Frida’s Faces," and Assistant Professor of Costume Design Aly Amidei.

"These collaborations have been crucial for me to create a complete piece of artistic expression," said Neil. "The collaboration with these artists was wonderful!"

The dance movement, projections and lighting design, and costume design were all inspired by art and artifacts from ancient Egypt, with a musical score of both traditional and contemporary Egyptian music.

See how "An Homage to Ancient Egypt" came together, in the studio, the costume shop, and finally at the museum. 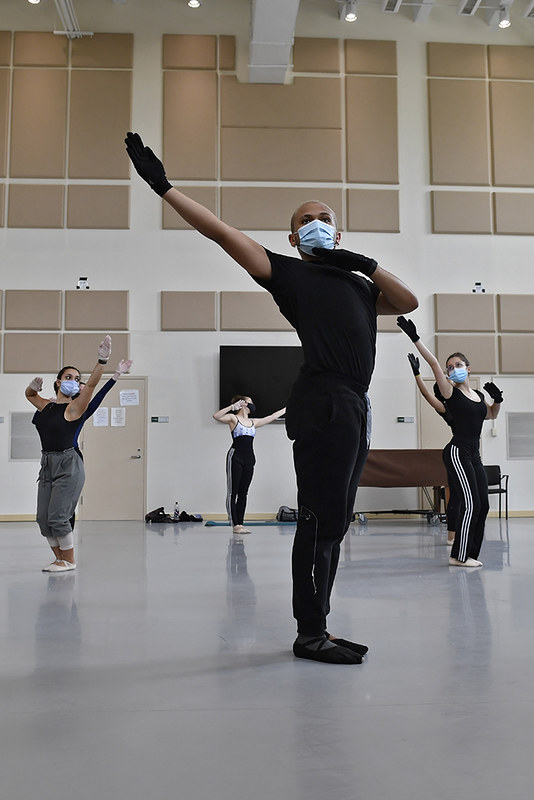