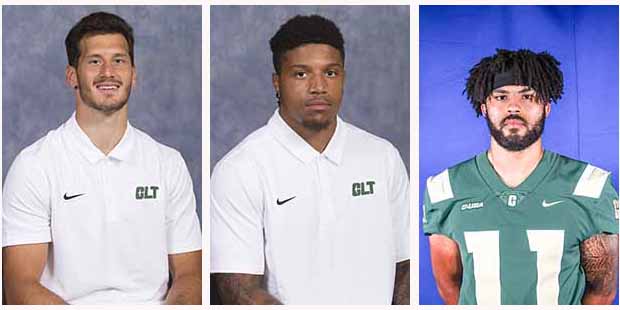 DeLuca, a four-year starting safety and two-time team captain, was one of 10 undrafted free agents that signed with the Los Angeles Chargers. He completed his 49ers career as the school’s all-time leader in tackles (313), solo tackles (196), forced fumbles (9), fumbles recovered (6) and pass breakups (17). He had four interceptions and averaged 7.3 tackles per game over his career. He was named Honorable Mention all-Conference USA in 2017, 2018 and 2020. A 2016 C-USA all-Freshman Team choice, DeLuca also earned Freshman all-America honors from Pro Football Focus.

Harbison and McKnight, who both played one season with the 49ers, signed undrafted free agent deals with the Cleveland Browns.

Harbison, a transfer from Northern Illinois who posted back-to-back 1,000-yard rushing seasons with the Huskies, led the 49ers with 337 rushing yards in six games played during the pandemic-shortened season. He averaged 56.2 rushing yards per game and scored a team-high four rushing touchdowns. He scored a touchdown in four of the 49ers’ six games.

McKnight was named Honorable Mention all-Conference USA in his one season after transferring from Illinois State. He made five starts in six games played during the pandemic-shortened 2020 season and led Charlotte with 5.0 TFL while adding 1.5 sacks. He averaged 4.0 tackles per game with a high of 10 tackles with a season-high 2.0 TFL at FAU.

Jaelin Fisher, a three-year starter and 2020 team captain, was invited to the Pittsburgh Steelers rookie minicamp. He was named to the Watch List for the 2019 and 2020 Rimington Trophy, which is awarded to the nation’s top center. In 2020, he landed on the Outland Trophy Watch List for the award presented to the nation’s top interior lineman. The 2020 C-USA honorable mention selection anchored the 49ers’ offensive line in 2019 when it was the only C-USA unit to earn a spot on the Joe Moore Award Midseason Honor Roll as one of the nation’s best offensive lines.