Graduating Levine Scholars are prepared — and eager — to make their mark

This week, 18 Levine Scholars — members of UNC Charlotte’s competitive, top-merit award scholarship opportunity — will graduate during Spring Commencement. They’ll join the ranks of more than 100 Levine Scholars Program alumni from across the country who, starting with the first graduating class in 2014, experienced full-tuition scholarships, selective summer and international opportunities, and research and mentorship opportunities exclusive to the Levine Scholars Program (LSP) on their way to making an impact in their fields and their communities.

Central to the Levine Scholars experience — a program hallmark according to the new graduates — is a chance to engage deeply on a civic level, volunteering with community organizations to develop leadership skills, hone humanitarian awareness and gain understanding of their potential to make a difference for people and communities.

"For over a decade, the Levine Scholars Program has attracted academically gifted and civically minded individuals who have greatly contributed to the University community and the city of Charlotte through their volunteerism, civic engagement projects and professional activities.  They have launched successful careers in locations across the state and country, and we look forward to following them as they leave UNC Charlotte and continue to give back to their communities in creative and meaningful ways," said Diane Zablotsky, director of the Levine Scholars Program.

Here, three graduating Levine Scholars, Leila Abu-Hassan, Elise Lyght and Dmitry Tereshenko discuss their UNC Charlotte and Levine Scholars experiences, the factors that clinched their decision to join the program and what they’ll take away from their Niner experience as they make the leap to graduate studies and new careers. 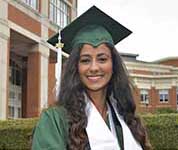 Leila Abu-Hassan, from Fuquay-Varina, North Carolina, is completing a major in International Studies with a concentration in Holocaust, Genocide and Human Rights Studies and Economics with a minor in Public Health:

“I learned about the Levine Scholars Program while visiting my older sister, Halimah, who graduated from UNC Charlotte in 2017. The program became my new dream, as I no longer wanted to apply to my former ‘dream schools,’ NYU and UNC Chapel Hill. Instead, I focused my energy on the application for LSP.” 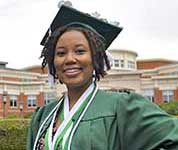 Elise Lyght, of Owings Mills, Maryland, is an English major with minors in Applied Understandings in Global Education and Urban Youth and Communities:

“I was led to the program because of a teeny-tiny postcard that I received from UNC Charlotte. My mom and I visited the campus during the summer before my senior year of high school; we spoke with LSP staff, and I decided to apply.” 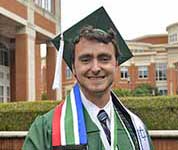 Dmitry Tereshenko, from Concord, North Carolina, is majoring in English with a concentration in Language and Digital Technology and Applied Anthropology with minors in Russian Studies and Linguistics:

“I was hesitant to apply because I felt like UNC Charlotte was too close to home. However, my college counselor genuinely believed that I belonged in the Levine Scholars Program and encouraged me to push past my initial hesitations. I couldn’t be more thankful for the support and the pretty insistent nudge to go through with the application.” (Tereshenko also received a substantial scholarship offer from Wake Forest University.)

Why was it important to you to pursue the Levine Scholars Program scholarship?

Lyght: The emphasis on community was a large part. I felt that I would have an absolutely phenomenal support network because of the bonding that's encouraged within and between cohorts. Additionally, the program's intentionality regarding service to others really attracted me. Seeing the numerous ways that scholars chose to get involved in Charlotte was inspiring and made me want to be a part of that force for change.

Tereshenko: Highlights that stood out during the application process were the study abroad requirements, the opportunity and expectation to be civically engaged and the pre-professional resources available. Because of these components of the program, I’ve completed three study abroad programs — a summer in Stellenbosch, South Africa; a semester in St. Petersburg, Russia; and another summer in the Old City of Jerusalem. I also have done a handful of nonprofit and pre-professional internships in special needs therapy, international education and research.

Abu-Hassan: I was initially attracted to the support given to scholars for professional development during the summers.

Tereshenko: Unlike other schools and other scholarship programs, I felt like I genuinely connected with the scholars that I met during LSP finalist weekend. For most of my senior year, I had planned to attend UNC Chapel Hill (which offered a full financial scholarship), but I struggled to find anyone to explain why they chose to attend beyond the prestige of the school. At UNC Charlotte, countless students talked about their love for UNC Charlotte, as a community and as a school, giving me reason after reason why they chose to come to UNC Charlotte.

Abu-Hassan: The focus on civic engagement played a huge role in my choosing this scholarship, but ultimately, it was the sense of belonging and community.

Lyght: Finalist weekend was what really made me select the scholarship; meeting all the current scholars confirmed that UNC Charlotte was the school I was meant to attend.

With community engagement such a large part of the scholarship, what can you share about your project and the reasons you wanted to undertake it?

Abu-Hassan: My civic engagement aligns with my goal of aiding children of Charlotte’s marginalized communities. I am currently working on two separate projects: I have partnered with ourBRIDGE for KIDS, and I joined forces with Dmitry Tereshenko to work with Kids Rein. The value of community service projects is to learn the correct way to approach situations in which there is a need. I have learned the value of followership and being receptive to others' needs by listening first and asking questions later. Instead of attempting to fix problems without a full understanding of the issue(s), I have learned solutions should be decided upon once the nonprofit partner communicates their needs.

Lyght: I'm collaborating with two other scholars to design a project that addresses homelessness in Charlotte. Part of what drove our interest was previous classes and exposure to systemic inequality that forces people into situations of homelessness. Even though our project didn't come to fruition due to COVID-19, we learned so much about the valuable network of community members and players involved in supporting homelessness. We had the opportunity to speak with grassroots organizers, journalists witnessing current events and faculty on campus who offered such important insight into the need for housing and the goals of our project. I personally know I’ll carry their thoughts with me because the work they are doing contributes to active citizenship working for equity, which I deeply admire.

Tereshenko: I combined my background growing up with horses and my love of working with children who have special needs to aid Kids Rein, a small therapeutic equestrian center that works with children and adults with special needs, veterans and other individuals dealing with PTSD. My internship responsibilities included desensitization training, assisting facilitate therapy sessions, and most importantly, aiding Kids Rein to plan and implement an on-site sensory trail that expands the available therapeutic curriculum.

Where will your Levine Scholars experience lead you next?

Lyght: I'm attending Johns Hopkins University to pursue a Master of Science in Education Policy. I'm so excited to specifically focus on international policy and to prepare to complete a Ph.D. and work in research or academia.

Tereshenko: In the fall, I will attend Georgetown University, fully funded, to pursue a Master of Arts in Language and Communication. The program is designed for students interested in socio-linguistic study to prepare for specialized, high-level research and to professionalize language-based skillsets. As of now, I have academic and professional interests in international relations, translation and interpretive work, inter/multicultural communication, international education and similar fields.

Abu-Hassan: I have accepted a position as a client relationship associate for the Charlotte office of The Vanguard Group and will begin studying for the Securities Industry Essentials exam, then I plan to go on to obtain my Series 7 and Series 63 licenses and continue to explore the world of investment banking.