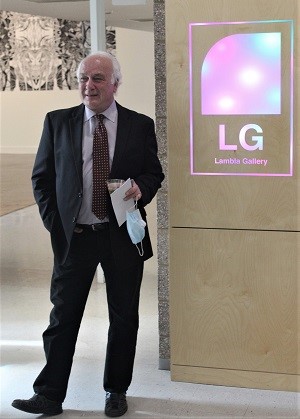 The University recently honored Ken Lambla, professor emeritus and founding dean of the College of Arts + Architecture, with the dedication of the Storrs Gallery as the Lambla Gallery to mark Lambla's retirement from UNC Charlotte.

In February 2021, Lambla was elevated to the American Institute of Architects College of Fellows, the AIA’s highest membership honor. The AIA recognized Ken for “advancing the standards of architectural education, training, and practice." His many achievements in advancing those standards occurred in his 38 years at UNC Charlotte.

Under his leadership, the research agenda and number of graduate programs in architecture expanded, and new research centers were established, including the City Building Lab, the Integrated Design Research Lab, and the Digital Arts Center. In addition, Ken fostered greater opportunities for mentorship and professional activity for students through such efforts as the creation of formal student chapters of professional organizations, the establishment of the Integrated Path to Architectural Licensure program, and large-scale projects such the U.S Department of Energy Solar Decathlon. Recognizing the necessity of a global education, he created, nurtured, and advanced multiple study abroad programs for students.

In 2006, Lambla undertook what will be his greatest legacy, the creation of the College of Arts + Architecture. The CoA+A launched in 2008, and he served as dean until December 2018.

Over the decades, Lambla has brought his expertise and energy to many University and community efforts. He served on the architect selection committee for numerous campus construction projects and served as a campus administrative leader in the design development of the Dubois Center at UNC Charlotte Center City. In 2010 he was co-chair with Chancellor Dubois of the Campus Master Plan that led to the major decision to support the light rail extension.

Among his long list of professional and community engagements are his years on the boards of AIA North Carolina, Charlotte Ballet, the McColl Center for Art + Innovation, and the National Architectural Accrediting Board.

After stepping down as dean in 2018, Lambla turned his attention to collaboration on two research projects, the National Science Foundation-funded  “Quantifying climate-dependent subcritical cracking and mechanical weathering over geologic time” and the National Endowment for the Arts-funded “Arts-based social mobility: Exploring cultural capital in Charlotte, NC,” and to the development of a proposal to establish a Master of Fine Arts in Community-Centered Practice in the college.