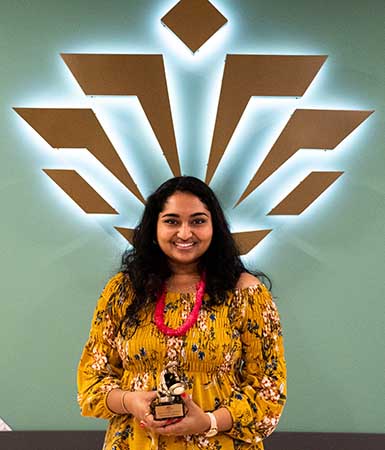 Hard work and excellence in everything. This idea captures how many UNC Charlotte students approach their jobs and academics, balancing both with determination and diligence. This idea is also an apt descriptor of what UNC Charlotte values in this year’s Student Employee of the Year, Faustina Edwin.

Edwin, a junior majoring in health systems management, began working at the Popp Martin Student Union and Cone University Center as a building manager. She was accepted into a non-entry level position, a rarity that had not occurred in the past four years. The building manager operates between both buildings, overseeing more than 300,000 square feet of space and works between 7 a.m. and 1 p.m. Edwin immediately jumped in and mastered the management of both facilities, which usually takes several semesters to do, all while assisting several other employees.

At the start of the spring 2020 semester, Edwin was promoted to the lead of training and development within the Popp Martin Student Union and Cone University Center.

“Faustina stood out amongst all candidates and already had plans and ideas in place for the staff,” said Emily Schinier, assistant director of operations at Popp Martin Student Union; she nominated Edwin for Student Employee of the Year. “She both directly and indirectly showed in less than a semester that she was ready to take on such an impactful role.”

As Edwin entered her position, she learned how to manage and adapt to the demands of the role and created change in operations that needed improvement. She grew into her role and leadership style, and successfully taught herself and implemented change.

“I had several individuals assume that she was a full-time staff member and were shocked to find out she was a student,” said Schinier.

Edwin went above and beyond expectations. She created assessment processes for training that engaged students and created guided reflection and restructured lead meetings and made the team culture into one of openness and engagement. She improved organizational culture to create more engagement, learning and overall success, as well as serving on the search committee for the chancellor.

“Faustina’s passion, dedication and innate leadership ability are unwavering, and we would be honored to have more staff like her,” said Schinier. “I know she will be an alumna that we will be highlighting for years due to her impact and contributions on the community. She is on a path to success, and we are honored to have been part of her journey.”

Edwin was honored at the end of year Popp Martin Student Union and Cone University Center department event, held in the Cone Center Lucas Room on May 6.