Swimming with the Sharks

It’s not surprising. When he’s racing, Conway, who still races full time for Lamborghini, likes to drive on the edge. So, diving into the treacherous waters of “Shark Tank” was just another adrenaline rush.

Conway co-founded the Charlotte-based startup PHOOZY, a spacesuit-influenced gadget guard company, and recently pitched the concept to the sharks.

Following a three-way bidding war, Conway and his business partner accepted an offer from two sharks — Lori Greiner and Robert Herjavec — who decided to invest together. 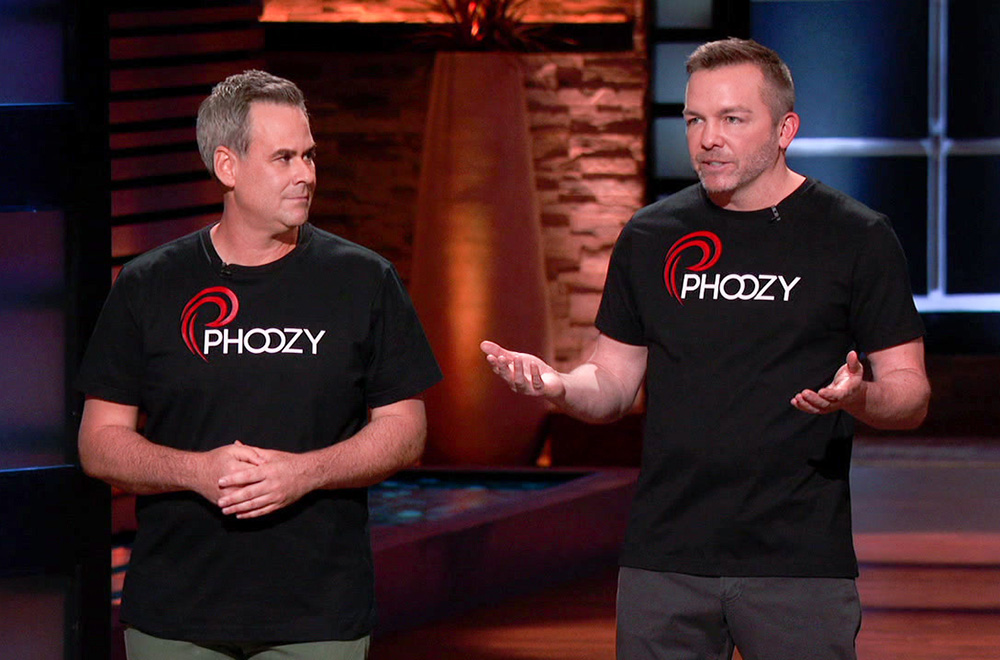 Conway (left) and his business partner, Josh Inglis, went on the popular TV show seeking $500,000 for a 10% stake in their company. They left with an even sweeter deal of $500,000 for an 8% stake in the company from Greiner and Herjavec.

Founded in 2017, the startup company manufactures thermal capsules that prevent handheld electronics from overheating in the sun and prolong battery life in extreme cold. The capsules also float in water in addition to providing drop protection. 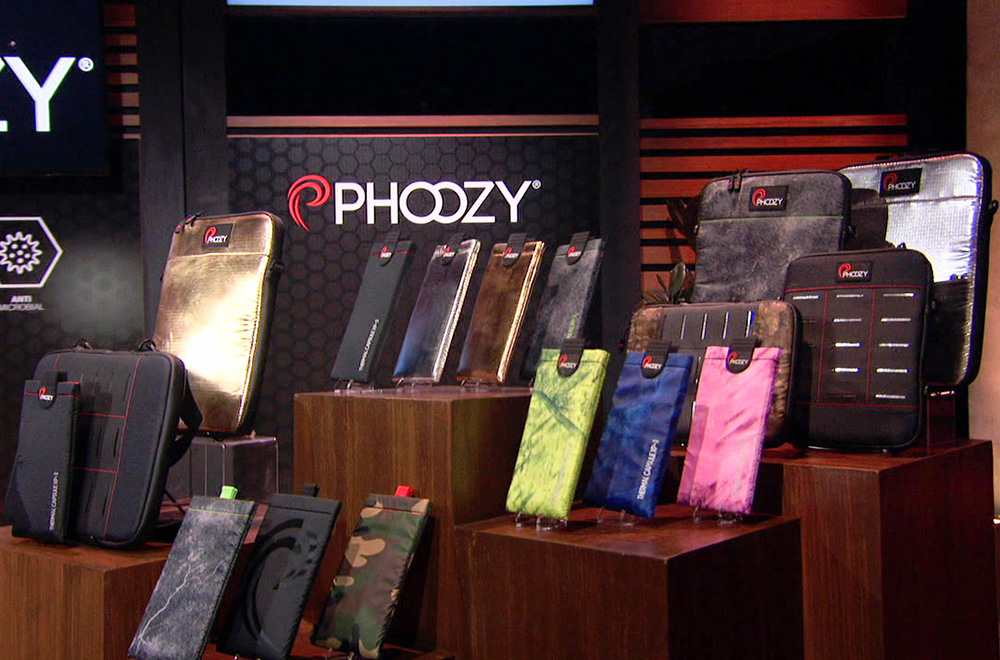 Fresh off his “Shark Tank” experience, Conway shared some insights into the company’s origins, his double life as a racecar driver and an entrepreneur, and what’s next for PHOOZY after the show.

Where did you get the idea to start this company?

I love to spend as much time on Lake Norman as I can and my phone would always overheat in the summer. There was never a good place to put my phone where it was accessible and protected from the damaging effects of the sun. After searching Best Buy and Amazon for a simple solution to help prevent my phone from overheating, I realized there wasn’t one.

That was the ah-ha moment when I identified a big gap in the market and decided to create a solution for both summer days on the lake and winter days spent on the mountain.

The PHOOZY product is made using materials developed by NASA, so how does a racecar driver with a business degree background connect with real-life rocket scientists?

There is a huge technology transfer between the aerospace industry and motorsports. In both industries aerodynamics and managing temperatures are major areas of focus. It was through my relationships with motorsports engineers that I was able to connect with scientists at Oak Ridge National Labs and begin to adapt materials originally developed by NASA, to create our own thermal composite. 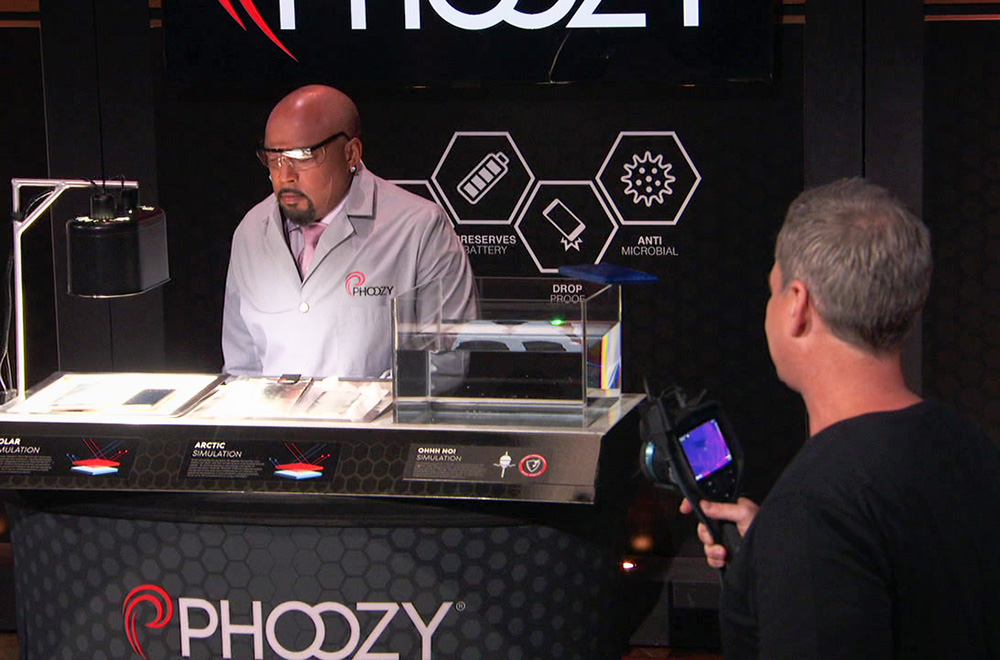 Conway walks one of the sharks, Daymond John, through a demonstration of the PHOOZY capabilities.

We've all seen the show Shark Tank, but it's got to be different to experience being on the show. What was that like and why do you think the sharks embraced the pitch so readily?

Going “into the tank” and pitching the sharks was one of the most intense experiences of my life. There is so much build up to that moment and so much effort that goes into beforehand that the pressure is immense. There are no “do-overs” and the cameras are always rolling, so what you see on the show is what really happens.

From the time the producers called us to enter the tank, it was several months of auditions and preparations. It’s an incredible experience and I would strongly encourage all entrepreneurs to apply and keep applying to be on the show. It can totally change your business.

Where do things stand now with PHOOZY after the show? Have you been in contact with Robert and Lori, and how are they helping?

For PHOOZY, it has been incredible as the “Shark Tank effect” is very real. We have grown more than 400% (year over year) since airing and it’s not slowing down. Shark Tank was a significant accelerant to our new products that we are launching this year and next, new distribution channels, and a major boost in brand and product awareness.

Robert’s and Lori’s respective teams have provided a lot of insight into our company and we greatly value their knowledge and feedback.

You were the 2010 Rookie of the Year in NASCAR and have survived Shark Tank, how has UNC Charlotte helped you accomplish these amazing outcomes in your life?

UNC Charlotte provided the foundation for me to learn how to learn. To dive into courses that you know nothing about but you learn invaluable skills of how to absorb and apply the knowledge from your professors. I have applied those same foundational principles in creating PHOOZY.

I had zero prior knowledge or experience in this industry, so the learning curve has been very steep. But having the confidence to learn, understand and apply has been a major part of our success. The principles that I learned at UNC Charlotte are a guiding force as we continue to learn and grow as a brand.

Check out PHOOZY's social media or purchase your own. The company is offering a 20% discount code to Niner Nation. Use the code UNCC20 when you checkout.