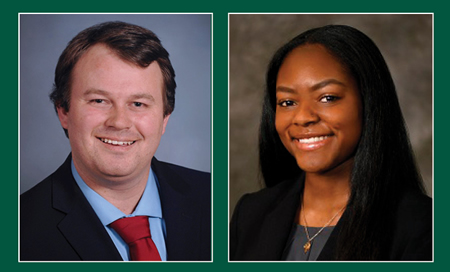 Beekman and Sampson will join four other scholars from the UNC System for an eight-week immersive and experiential summer program, designed to help them develop leadership skills and gain a better understanding of key issues facing public higher education.

As part of the program, Beekman and Sampson will be placed in a state government agency, to gain valuable working experience in the fields of public service and higher education. Beekman will work with North Carolina Military and Veterans Affairs, and Sampson will work in Student Affairs in the UNC System.

The scholars will work with UNC System leaders, tour individual campuses and visit with key state policy leaders and elected officials in North Carolina and Washington, D.C. Additionally, each student will develop and present a capstone project outlining the role of higher education in North Carolina.

Open to rising juniors and seniors, the program began in 2013 and is named for Marian Drane Graham, the wife of Frank Porter Graham, the first president of the consolidated UNC System. The program’s namesake reflects its emphasis on pairing scholars who are passionate about education policy and public service with agencies in North Carolina.