Dance is movement. It is art and expression, and most importantly, it communicates through musicality. Assistant Professor of Dance Tamara Williams, whose latest project, “ÌBÀ OBÍNRIN,” premieres as part of this year’s Juneteenth observance, embraces the storytelling aspect of dance through performance and choreography.

“ÌBÀ OBÍNRIN,” a short film featuring three dances created by Williams, will premiere virtually on June 19 as part of a larger initiative sponsored by the National Center for Choreography at the University of Akron. 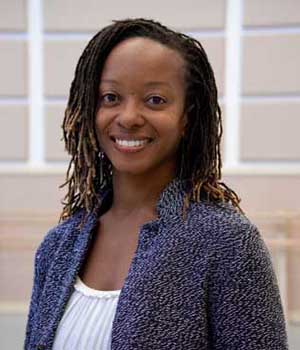 “Juneteenth, or Freedom Day, celebrates the liberation of enslaved people in the United States,” said Williams. “And while many people are familiar with prominent male figures in the fight for freedom, such as Nat Turner, I want to pay homage to Black women for the strength they exhibited, for their planning and organizational skills as well as for how they care for people, which has been essential in times of resistance. Even today, observe the women who are founders of Black Lives Matter and the mothers who come forward seeking justice for their sons killed in police-involved shootings.”

A Yoruba phrase, ÌBÀ OBÍNRIN is associated with west Africa traditions that honor primal forces of nature: air, earth, fire and water. These elements are showcased in the film’s locations: Big Rock Nature Preserve, the Catawba River near the site of a former slave dwelling and McAlpine Creek Park.

“Nature nurtures us, much like women nurture their families and communities. So, it was important for the dance movements to be part of nature,” said Williams. “Indigenous people have a reverence for nature and earth’s feminine energy, but I also wanted to tap into the masculinity represented by the large boulders in the Big Rock Nature Preserve to help carry that narrative. At the Catawba River, I convey how water is cherished for its power to cleanse and rejuvenate, and at McAlpine Creek Park, a muddy location represents the medium between land and water.”

Originally from Augusta, Georgia, Williams earned a Bachelor of Fine Arts from Florida State University. From there she started an international performance career, settling in New York City in 2006.

To advance her research interests, Williams attended Hollins University, which offers a low-residency, two-summer graduate program that allowed her to continue performing while in school. As part of the program, she participated in the American Dance Festival at Duke University; conducted research and learned the Silvestre Technique, the contemporary dance technique founded by Rosangela Silvestre as an extension of the spiritual dance traditions of enslaved Africans in Brazil; and danced and studied in Europe through Frankfurt University, which partners with Hollins University to award a Master of Fine Arts.

She joined the UNC Charlotte College of Arts + Architecture in 2016.

When did you know you wanted to dance professionally?

Dance has always been part of my family. My parents welcomed friends into our home to dance, and I was invited to join. My sister, who is three years older, began taking ballet lessons, and she showed me various movements. I began formal training in dance at Augusta’s Davidson Fine Arts Magnet School starting in fifth grade. Admittance required an audition, and I was actually accepted for creative writing. But I started taking ballet and fell in love and selected it as my concentration. Starting in sixth grade, I began studying with an outside dance studio, where I learned other dance forms, such as West African and jazz.

Can you point to specific experiences that have influenced you as a performer and choreographer?

I would say my first trip abroad to Belgrade, Serbia, with David P. France Dance Company. It was 15 years ago, but I was able to build really close relationships with those artists that I maintain today. So, I credit my dance career with enabling me to build those lifelong friendships.

Second, I would point to my work with Urban Bush Women, which taught me the importance of community involvement. I learned not only how to pay attention to the needs of the community but how to enter and exit a community in a way that is respectful. Community is central to our mission in the College of Arts + Architecture, and we are still working to become better engaged. For example, the UCITY Family Zone is illustrative of how departments and colleges across the University can establish connections with the community and serve the needs of Charlotte and the region.

My mentors, Rosangela Silvestre, Vera Passos and Jawole Zollar, have been instrumental in my growth as a performer and choreographer.

What prompted you to join the faculty at UNC Charlotte?

My sister, Tijwanna Ketter, has lived in Charlotte for more than 15 years, and she would constantly send me updates on what was happening with regard to the local arts community and at the University. As I a began my master’s degree, my graduate mentor advised me to consider undertaking a faculty position at a research institution to enable me to advance my research interests.

In 2015, I saw UNC Charlotte was seeking to hire a faculty member to teach African Diaspora dance, which placed the University at the forefront of recognizing the value of African Diaspora dance alongside ballet and modern dance. As a finalist, I visited the campus and over the course of two days had numerous conversations with faculty and students, and everyone was very welcoming. I also was attracted to the college’s mission to be immersed in the community.

You consider dance a vital form of artistic expression; why is it important that various dance traditions be preserved?

Dance tells stories and preserves history through the movement of the body. Consider the ballet, “Giselle,” which provides a glimpse into the world of European aristocracy. There is a dip, called a reverence, performed when members of the court enter. Virtually all dance traditions help us to hold on to the memories of our elders and honor those who passed before us.

Mostly recently, I have researched Ring Shout, which is a dance form important to African American communities in the Southeastern United States. Brought to the United States during the Transatlantic Slave Trade, Ring Shouts were a mix of rich cultures, traditions, songs and dances from various communities, designed to create a new community within the violent New World. The spirit of Ring Shout is not only in the gospel churches of the Southern United States, but the same energy and culture can be found in the Shouting communities of Trinidad and Tobago, Jamaica, Barbados and more.

Through dance, I can evoke myriad emotions depending upon the work, but performances also depend upon the audience and how their personal history relates to the piece. One gesture for some may be joyful, while others feel sadness.

Never do I want to create a piece and the audience feel nothing; that’s when I have failed as an artist.