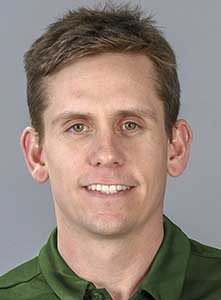 Tyler Hancock joins UNC Charlotte as special teams coordinator for the 49ers football program. He comes to the University from West Virginia University where he served as senior analyst for special teams for two years.

"We are really lucky to add Tyler Hancock to our staff," said Head Coach Will Healy, who will begin his third season with the 49ers this fall. "He has an incredible knowledge of special teams, specialists as well as scheme, and will do an incredible job of bringing an emphasis to that phase of the game. He is a tremendous staff fit and does an excellent job of creating lasting relationships with his players, both on and off the field.  We are excited to see how our special teams will continue to improve under Tyler's leadership."

As senior analyst at West Virginia, Hancock oversaw the program's football analyst and quality control assistant coaches while being instrumental in the special teams game. He organized and implemented all aspects of game analysis and oversaw game planning for the special teams unit. He analyzed game film and created game plans to assist the coaching staff.

Hancock was special teams quality control coach at the University of Maryland (2016-18). During his time there, he assisted the linebackers/special teams coach as well as the tight ends coach.

He spent four years at the University of Kentucky where he worked with special teams, outside linebackers and the secondary (2014-16). He also spent one season as a defensive intern and one season as an offensive assistant working primarily with quarterbacks and tight ends.