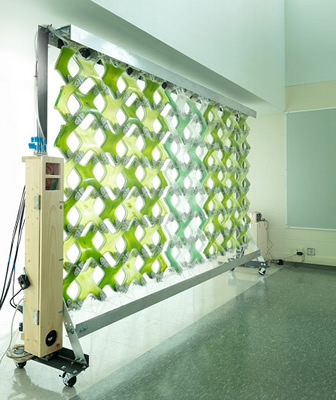 A patent-pending microalgae window system developed in the College of Arts + Architecture's Integrated Design Research Lab (IDRL) has won a 2021 R+D Award from Architect Magazine. The interdisciplinary project, led by Kyoung Hee Kim, associate professor of architecture and director of the IDRL, is in its ninth year of development and has received grant funding from the American Institute of Architects and the National Science Foundation, most recently through an NSF Small Business Technology Transfer Phase I (STTR) grant.

"In the era of climate action, a façade that reduces energy consumption and actively sequesters carbon can hardly come sooner," wrote Murrye Bernard in the July/August issue of Architect. "A microalgae window system by the Integrated Design Research Lab at the University of North Carolina Charlotte checks both boxes while cultivating a renewable energy source and supporting occupant wellness through improved indoor air quality and reduced glare and solar heat gain."

Architect chose six winners from 62 entries for its 15th annual R+D Awards. The jury selected projects that "address environmental and societal needs with the resources, materials and technologies at hand," the magazine said in its announcement.

Photo by Mike Basher for Architect.