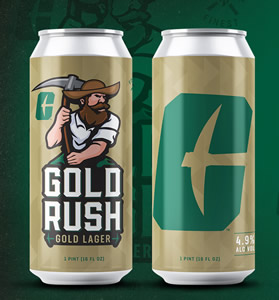 The Charlotte 49ers and LEARFIELD have partnered with Cabarrus Brewing Company (CBC) to create a series of special craft beers for Niner Nation to enjoy. The first in the series is CBC's Gold Rush Gold Lager.

The co-branded beer will be available at more than 50 Harris Teeter locations and on sale at Charlotte 49ers home athletic events.

"I'm beyond excited about joining with Charlotte Athletics and creating a series of beers that will reflect the Niner spirit," said CBC co-owner and founding brewer Jason McKnight, a 49er alum. "I can't wait to enjoy these beers at sporting events with friends and other alumni while cheering on Niner Nation.”

The Charlotte 49ers and Cabarrus Brewing Company urge fans to drink responsibly and will communicate responsibility messaging at events and during game broadcasts throughout the season.