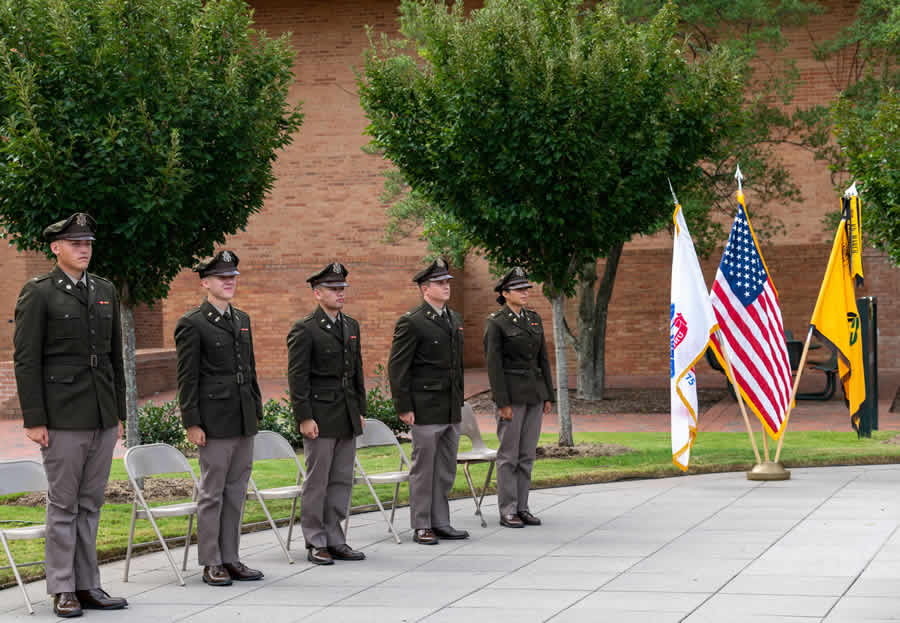 During the outdoor ceremony, friends, family, faculty and staff celebrated these officers as they committed to the Oath of the Commissioned Officer and were pinned with gold bars. After the ceremony, the officers were presented silver dollars after receiving their first salutes, a custom of the U.S. Army.

“Today marks a major milestone not only in their new careers but in their lives,” said Lt. Col. Blake Smith, chair and professor of military science. “Becoming an officer in the U.S. Army is about joining something bigger than yourself and these outstanding young students have stepped up to be the ones to lead America’s sons and daughters.”

Keoni Arnold of Fayetteville, North Carolina, who held the rank of first sergeant of A Company in the ROTC program; he earned a degree in political science and will attend the U.S. Army Signal Corps Basic Officer Leaders Course at Fort Gordon, Georgia

Eric Dippold of Washington, D.C., who held the rank of company executive officer; he earned a degree in history and will attend the U.S. Army Infantry Basic Officer Leaders Course at Fort Benning, Georgia

Roxana Pozos of Charlotte, North Carolina, who held the rank of battalion commander; she earned her degree in psychology and will attend the U.S. Army Quartermaster Basic Officer Leaders Course at Fort Lee, Virginia

Kenny Thai of Hickory, North Carolina, held the rank of first sergeant of Headquarters and Headquarters Company; he earned a degree in history and will attend the U.S. Army Adjutant General Basic Officer Leaders Course at Fort Jackson, South Carolina.

Timothy Wood of Waxhaw, North Carolina, who held the rank of cadet captain; he earned a degree in psychology and will attend the U.S. Army Military Intelligence Basic Officer Leaders Course at Fort Huachuca, Arizona.

Smith added, “I am proud of these individuals who are serving something greater than the pursuit of personal success and look forward to watching their careers grow in the coming year. I know without a doubt they will all be successful in this daunting task they’ve undertaken.”

Two of the new officers, Dippold and Pozos, were asked to share more from their experiences as cadets and their future plans.

Why did you select the individual who led you through the Oath of the Commissioned Officer?

Dippold: I was honored to have Col. John Bogdan swear me into the U.S. Army. I chose him because of my respect for him and all he has done in mentoring me and how he has treated me.

Pozos: I chose Maj. Caitlin Moore to lead me through my Oath, which felt very symbolic. I did JROTC for four years in high school and ROTC all four years at UNC Charlotte and it was not until my senior year of college that I met such an influential woman in the military who actually guided and mentored me. She has impacted my life in so many ways and I could not be more thankful.

Who did you select to pin your gold bars onto your uniform? Why was their support important?

Dippold: Being pinned by one of my best friends, 1st Lt. Hunter Brown, was a great feeling. I've wanted to be in the military since I was 4 years old and after trying for 16 years to get in, it gave me a feeling of relief when I received my lieutenant bars.

Pozos: I received my pins from my parents, which meant everything to me. I am a first-generation college student and the first female and person on both sides of my family to join the U.S. Army. Both of my parents migrated from Mexico, leaving everything to provide a better life for their future family, and this was something they never imagined. It is scary for both of them but they have never stopped supporting me. I can’t thank them enough for all the sacrifices they have made.

What are your next steps in the Army?

Dippold: I will attend Infantry Officer School and after completing a pipeline of schools (Airborne and Ranger), I will hopefully serve as a platoon leader. I do have other aspirations in the Army but for right now I am focused on being a good leader to my men and women.

Pozos: I am an active duty quartermaster officer, which means I work full time for the Army for the next four years. I will be going to Fort Lee, Virginia, in October for my basic officer leader course training and upon graduating, I will be stationed with the 1st Infantry Division under an aviation brigade.

You have made the valiant decision to serve this country. What motivates you to continue in that decision each day?

Dippold: Throughout my life, I have been surrounded by evil people and grew up watching the evils of various countries and organizations that oppress others for a variety of reasons (religious, ethnic, political etc). I have grown tired of watching them get away with their cruel acts and witnessing the suffering of the innocent. At the end of the day, I want to fight these evil people and protect the innocent, while simultaneously being the leader my men and women deserve and doing everything in my power to protect and lead them into combat.

Pozos: First and foremost my family, then, the people who have done ROTC with me. I have been surrounded by some of the greatest instructors both retired and active the past eight years, and I cannot even begin to express my gratitude for all the wisdom, lessons and leadership that they have instilled in me. Overall, it is the people who I have met and who I will be meeting along this career — so many different backgrounds with so much to learn.