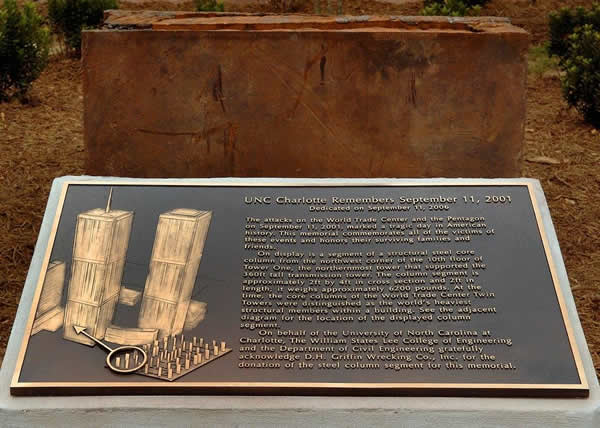 A community of Niner Nation first-responders and UNC Charlotte's own ROTC battalion will participate in a stair climb at 9 a.m., Saturday, Sept. 11, to mark the 20th anniversary of the deadliest terrorist attack on U.S. soil, referred to as 9/11.

These 49ers will climb the equivalent of the 110 stories of the World Trade Center in Atkins Library to honor the 343 firefighters, 60 police officers and eight emergency medical personnel killed in the collapse of the Twin Towers. The event also honors the impact the events of 9/11 had on the nation's military members.

“Sept. 11, 2001, is an emotionally significant date for first-responders, especially those who watched it unfold live 20 years ago,” said Eric Huhn, organizer of the stair climb and facility and laboratory safety engineer in The William States Lee College of Engineering. “By taking time to put myself in the shoes of the members of the New York City Fire Department that worked their way up the Twin Towers, I get a renewed sense of respect and admiration for all those who rushed to Ground Zero. I'm excited to have found a community of other first-responders here on campus who also want to ‘walk in the shoes’ of those who made the ultimate sacrifice.”

UNC Charlotte’s campus is home to a piece of 9/11 history, helping  the community honor the nearly 3,000 lives lost 20 years ago at the World Trade Center, Pentagon and aboard United Airlines Flight 93.

A steel section from Tower One of the World Trade Center, located outside of Duke Centennial Hall, provides opportunities for reflection and remembrance in honor of 9/11. The column, dedicated on Sept. 11, 2006, was donated to the Lee College of Engineering and the Department of Civil Engineering by the D.H. Griffin Wrecking Company.

“America was forever changed on Sept. 11, 2001,” said Chancellor Sharon Gaber. “As we approach the 20th anniversary of the tragic attacks, I ask you to pause for a moment to remember and honor those that were lost and the resilience and strength of our country.”

Charlotte football will commemorate 9/11 during its home game against Gardner-Webb University on Saturday, which kicks off at 6 p.m. Retired CMPD Police Chief Kerr Putney ’92 will serve as honorary captain, the Army ROTC Ranger Challenge Team will help with game ball delivery and members of the University’s campus police force, who retired from the New York Police Department and were at Ground Zero, will be recognized during the first quarter break. The “Pride of Niner Nation” Marching Band will play a medley of “Taps,” “Amazing Grace” and “America the Beautiful” during the pregame show.

Learn more about the 20th Anniversary Stair Climb and how to make an impact for current and future first responders.