Researcher to talk about alt-right recruiting methods for Personally Speaking 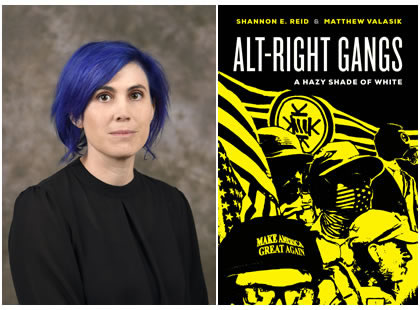 UNC Charlotte researcher Shannon Reid will explain how prevention and intervention strategies can make a long-term impact on the lives of youth attracted to alt-right gangs, in the first event of the 2021-22 Personally Speaking series.

Her talk, scheduled for 7 p.m., Tuesday, Sept. 14, will be a virtual discussion about how and why youth become involved in gangs that have white power signs, symbols and ideologies. The book, “Alt-Right Gangs: A Hazy Shade of White,” co-authored by Reid focuses on understanding the evidence behind the development, growth and influence of alt-right groups within the white power movement.

Reid, an associate professor in the Department of Criminal Justice and Criminology, earned a doctorate in criminology, law and society from the University of California, Irvine. She joined the University faculty in 2013. Her research is focused on youth violence, especially youth involved in gangs, including white power gangs such as Proud Boys; and on identifying prevention, intervention and suppression efforts with a long-term impact on this issue. Her research has drawn significant national media attention.

Now in its 12th season, the Personally Speaking series offers the community an opportunity to hear published experts from the College of Liberal Arts & Sciences (CLAS) — and participate in a question-and-answer period. Each event is designed to stimulate conversation with researchers, about topics that are both interesting and relevant.

The Sept. 14 virtual presentation will be hosted by the College of Liberal Arts & Sciences, The Dubois Center at UNC Charlotte Center City and the J. Murrey Atkins Library. Online registration is requested. The Emerging Media Communications Team, part of the University’s Audiovisual Integration and Support for Learning Environments (AISLE) is facilitating this virtual event, which will be recorded and available on the CLAS YouTube channel following the talk.

The Personally Speaking website has details about the other talks scheduled for the series: