From the Owls to the All-in-C

September 23, 2021, UNC Charlotte celebrates its 75th birthday. It was three quarters of a century ago that The Charlotte Center originally opened to serve WWII veterans in 1946. For fall 2021, the University boasts 30,448 students, setting an historic enrollment record for the third consecutive year.

To commemorate the occasion, we’re taking a walk down memory lane, paying homage to the signs and symbols that have been a part of the University from its earliest days.

Want to see more? Be sure to visit the J. Murrey Atkins Library’s exhibit on the first floor which includes photos and artifacts, as well as a look at mascot Norm the Niner through the years. The event is open to the public all year in celebration of the 75th Anniversary.

Thanks to Special Collections and University Archives for their help in compiling this article. 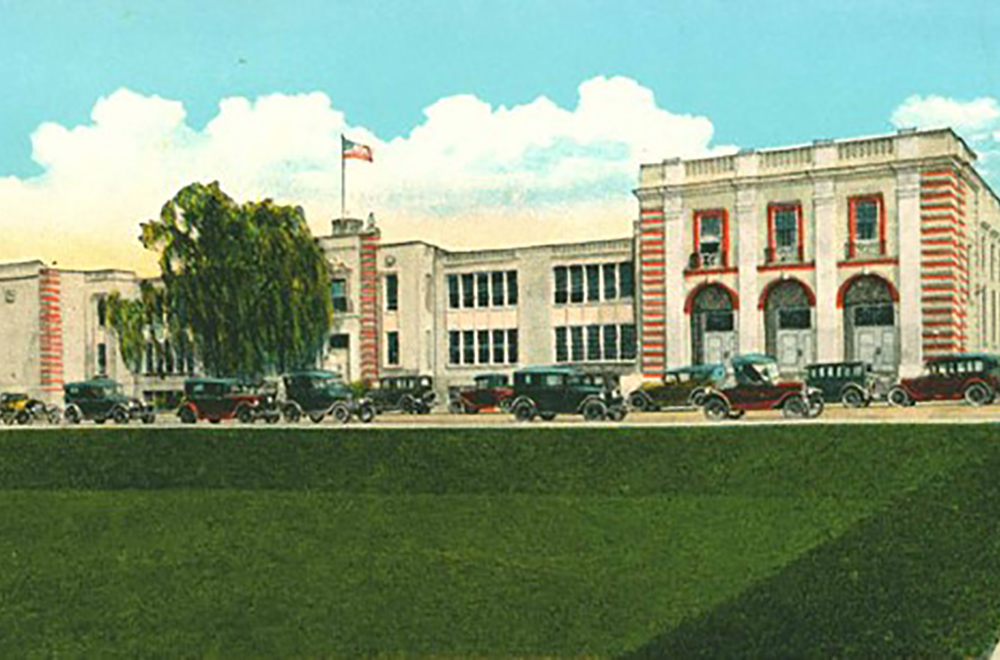 Charlotte Center of the University of North Carolina (CCUNC) was founded on Sept. 23 as one of 14 evening college centers to serve returning veterans following World War II. These were created in response to rising education demands generated by the war and its technology. 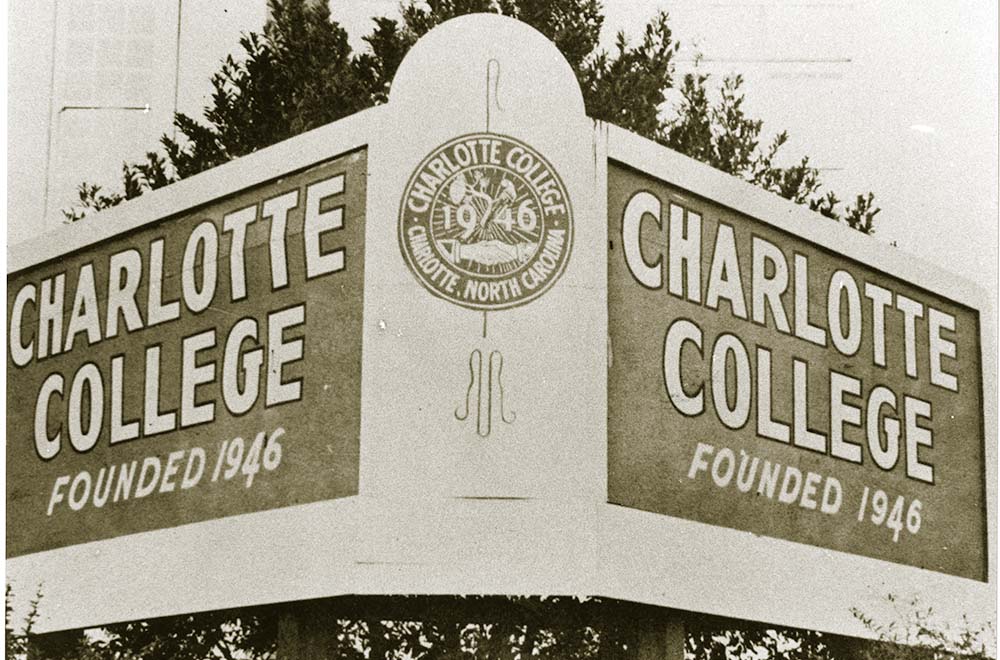 After three years, North Carolina closed the state’s college centers, declaring that on-campus facilities were sufficient to meet the needs of returning veterans. Charlotte community leaders, at the urging of then director Bonnie E. Cone, saved the Charlotte Center from closing. It became Charlotte College, an independent two-year junior college operated by the Board of Education of the city of Charlotte. The seal above displays the new name along with the founding year.

This fighting spirit in 1949 is how UNC Charlotte came to be known as the 49ers. 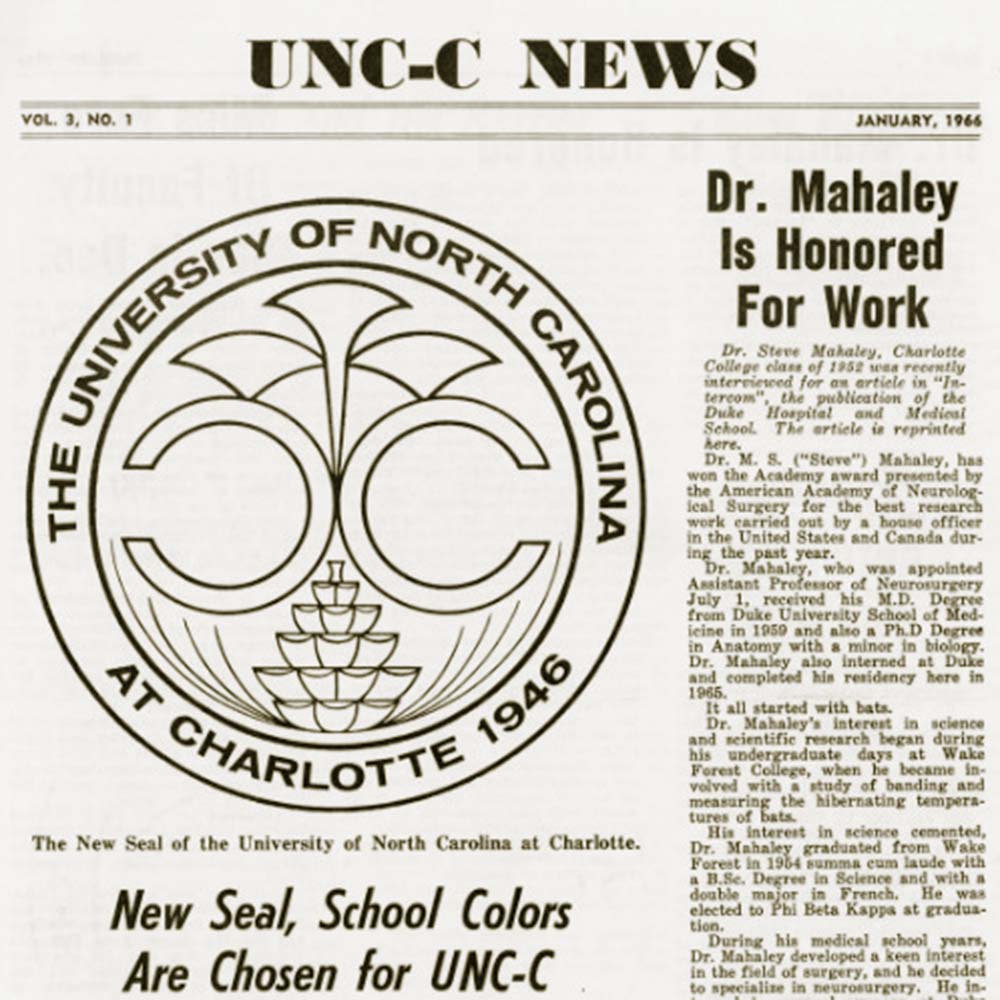 Shortly thereafter, the school adopted the seal features above, plus designated the official University colors as forest green and white. Charlotte College’s colors had been light grey and maroon.

The henceforth-named “Victory Bell,” was famously rung to celebrate Charlotte College officially joining the UNC System. The bell, which previously hung at Elizabeth School on East Fifth Street and Travis Avenue, was given to Charlotte College in 1960. It is currently rung at the conclusion of every Commencement ceremony and students can apply to be the official bell ringer. 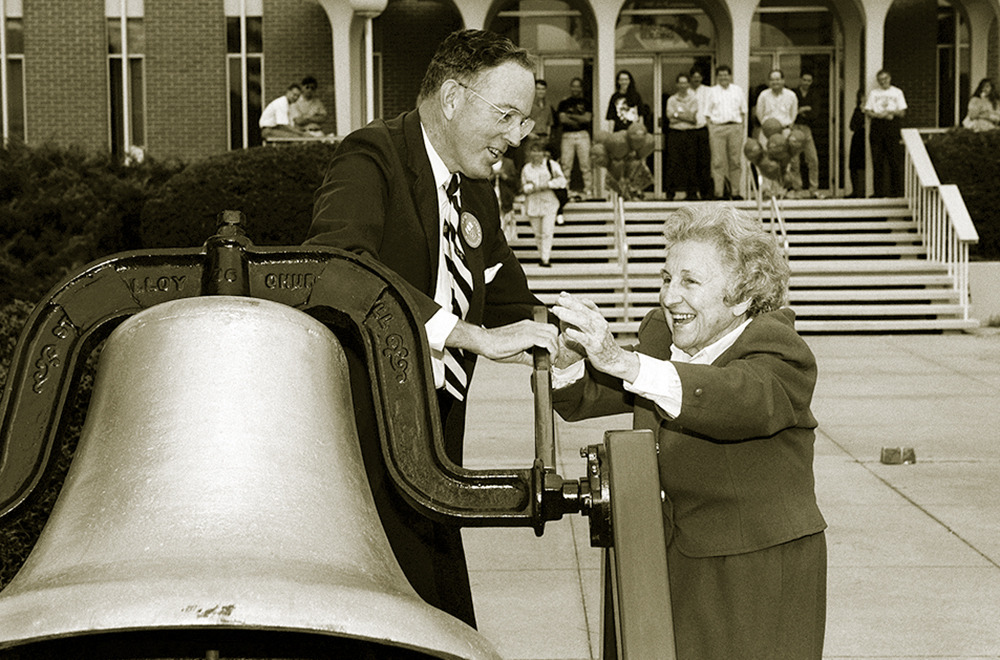 Being part of the UNC System elevated the institution and gave the University instant recognition, especially during the early years. However, UNC Charlotte was relatively unknown outside of the region, and the administration sought to build a distinctive identity with the first official logomark. Joe Sonderman, with Jack Pentes Design, created the block form UNCC logo as a pro bono project.

Fun Fact: The same, but different

As the University grew, a different identity issue emerged. Area community college and technical systems began using the “CC” acronym as part of their name, such as CPCC (Central Piedmont Community College) and GTCC (Guilford Technical Community College). To alleviate confusion and build more national recognition and connection with the growing city of Charlotte, the University adopted a new mark. Once again designed by Joe Sonderman, the “crown logo” represented its two greatest assets: the UNC System and the Queen City.

While the crown icon is a nod to the Queen City, this particular version was designed to signify a graduate in commencement regalia. Many see the peak of the crown to be a mortar board cap and the shapes on either side to be a traditional commencement gown. 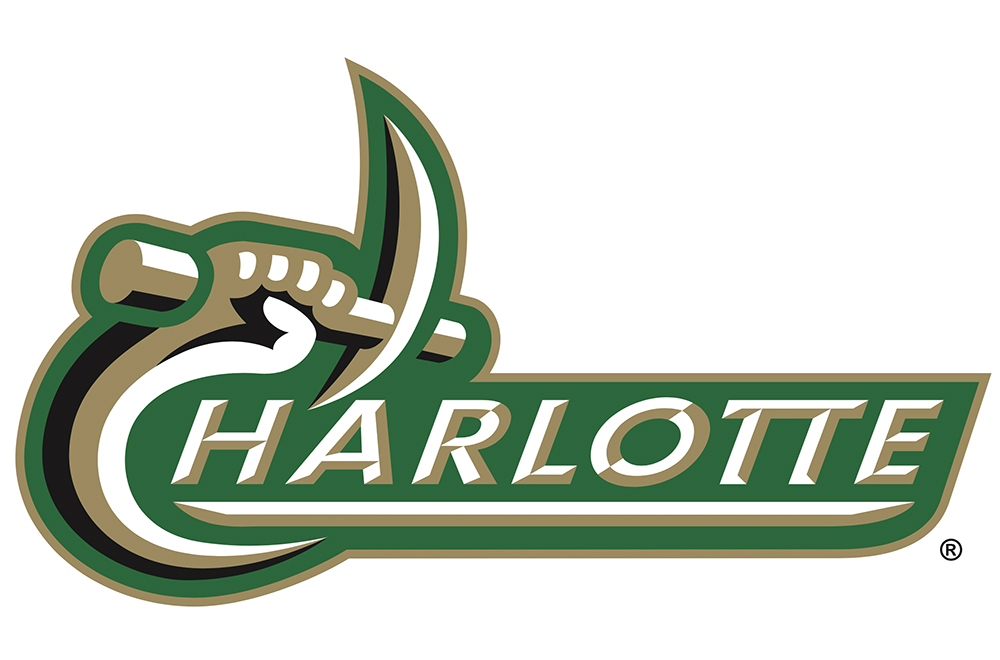 The athletics department officially changed its name to simply Charlotte in 2000 and created a new logo to accompany the move. While UNCC and UNC Charlotte were the officially accepted athletics names at the time, media outlets frequently used unofficial nicknames such as N.C.-Charlotte, N.C.-Char, North Carolina-Charlotte, UNC, UNC-C, UNCC at Charlotte, and others. The new logo, referred to as the “C-Pick,” depicts an arm holding a miner’s pick, simultaneously forming a “C” as the first letter in “Charlotte.”

In addition to the arrival of the new athletic mark, the 49ers unveiled three secondary logos: The "C-Pick" as a stand alone logo, a logo that incorporates both the "C" and the "4-9-e-r-s" logo, and a 49ers wordmark.

The original crown logo was revised slightly in 2008 for a cleaner look and to provide increased distinction from the UNCC moniker. In this version, “UNC” and “Charlotte” are separated and all the letters are the same size. Additionally, the bottom of the crown is removed with the type creating the base.

With this evolution, the University begins using the logo with its various sub brands, providing consistency across the units and departments. Additionally, an “out of market” logo was created featuring “Charlotte'' in a larger font for added emphasis. 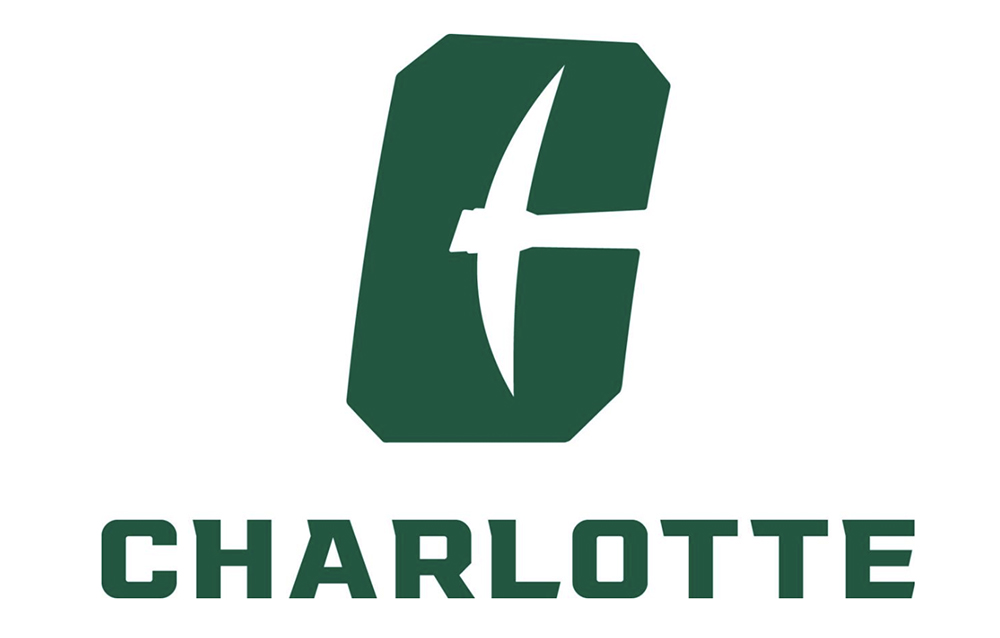 In July 2020, the Charlotte 49ers unveiled a new athletics logo. The centerpiece is a distinctive mark called the “All-In C.” An evolution from the original Charlotte athletics logo, it places the classic 49ers’ gold-mining pick inside a collegiate-inspired “C” with beveled corners. It features an aggressive stance and a 9-degree forward tilt that illustrates the brand’s positive energy and forward momentum.

In 2019, the Athletics Department and Charlotte-based strategic communications firm Luquire, completed internal and external research to develop the new brand with a broad cross-section of University stakeholders, in-depth interviews with selected administrators, supporters and licensees, and extensive online surveys targeting alumni and students. 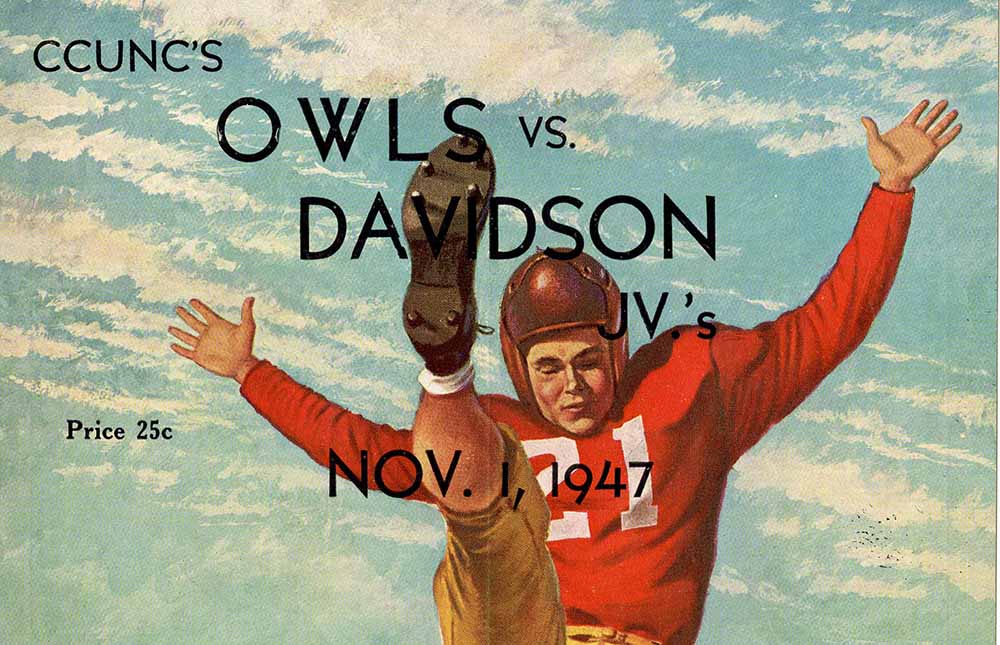 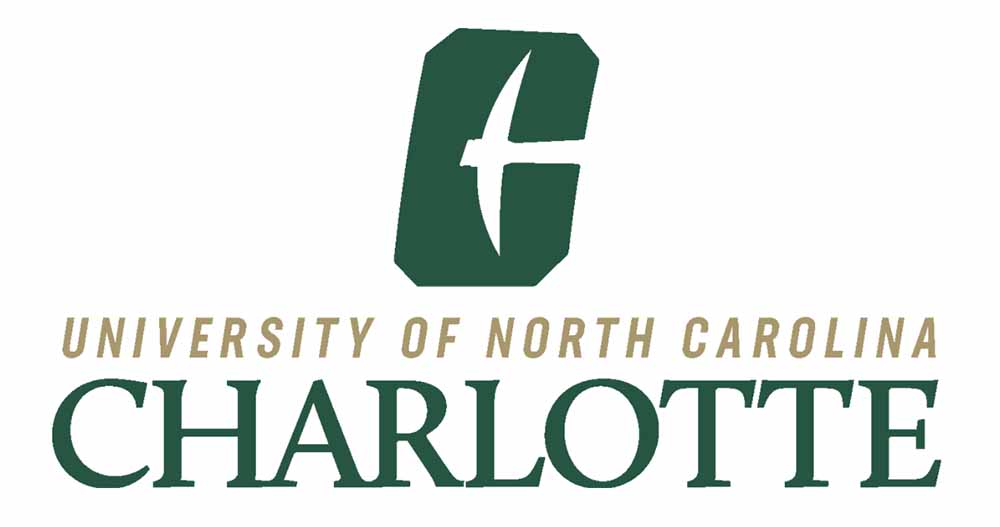 In early 2020, UNC Charlotte began assessing public perception of the University brand. The arrival of UNC Charlotte’s fifth chancellor, Sharon L. Gaber, and the upcoming 75th anniversary of the institution triggered the charge to strengthen and better define the University’s brand, while striving to increase its national and international reputation.

Working with Luquire, UNC Charlotte researched University perception from more than 5,000 individuals, including current and prospective students and parents, faculty, staff, alumni and other key stakeholders.

Research showed general audience confusion with the two visual identities: the athletics “All-in-C” and the University crown logo, along with relatively low logo recognition as compared to other UNC system schools. Many universities experience similar identity issues, and the national trend has been to combine or create complimentary marks.

In August 2021, the University debuted a new primary logo that combined the 2020 athletics mark with a revised type treatment, bringing “Charlotte” to the forefront and creating one cohesive University identity.

The new University mark, along with the 2020 athletics mark, was designed by Todd Aldridge ’92, a distinguished alumnus of UNC Charlotte’s College of Arts + Architecture, president-elect of the UNC Charlotte Alumni Board and senior vice president and executive creative director of Luquire.

“This was really a labor of love,” said Aldridge, who represents one of three generations in his family with connections to the University spanning nearly 50 years. “UNC Charlotte means so much not just to its alumni, faculty, staff and students, but to the entire community. As the school’s impact on our region reaches new heights, we were determined to develop an identity that reflected a positive, forward trajectory.”

Visit brand.charlotte.edu to learn more about the new brand.