Donning of the Kente: More than a graduation tradition, a ‘symbol of achievement’ 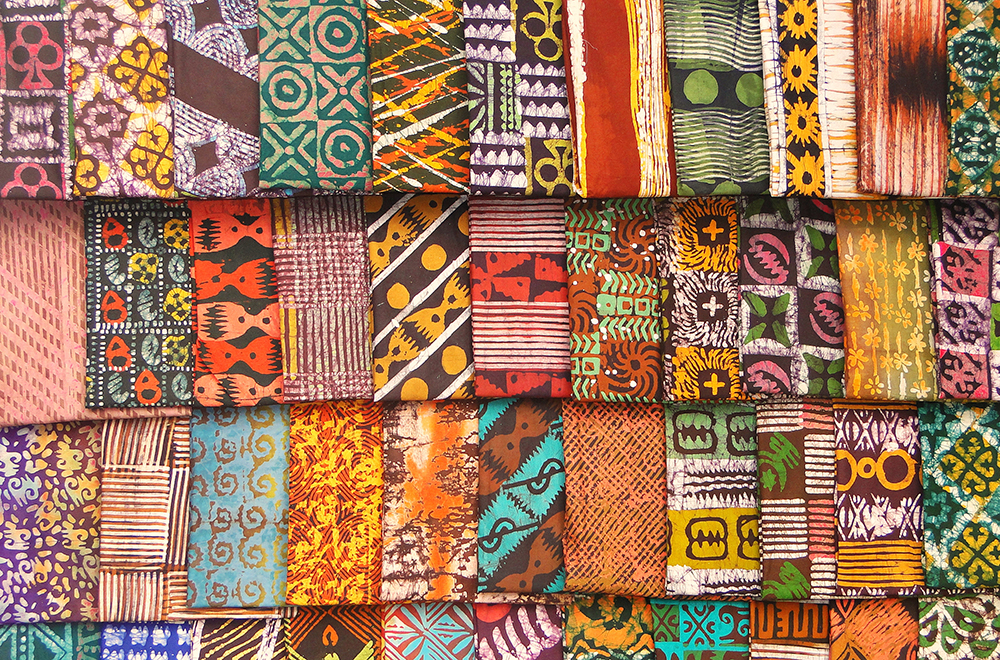 Hold a piece of kente cloth in your hands and you can’t help but take notice — the bright colors beautifully and artfully woven together make a statement.

That colorful statement is the idea behind the University’s Donning of the Kente ceremony, a celebration of cultural achievement that takes place each commencement season, acknowledging the academic achievements and future aspirations of students from underrepresented groups. 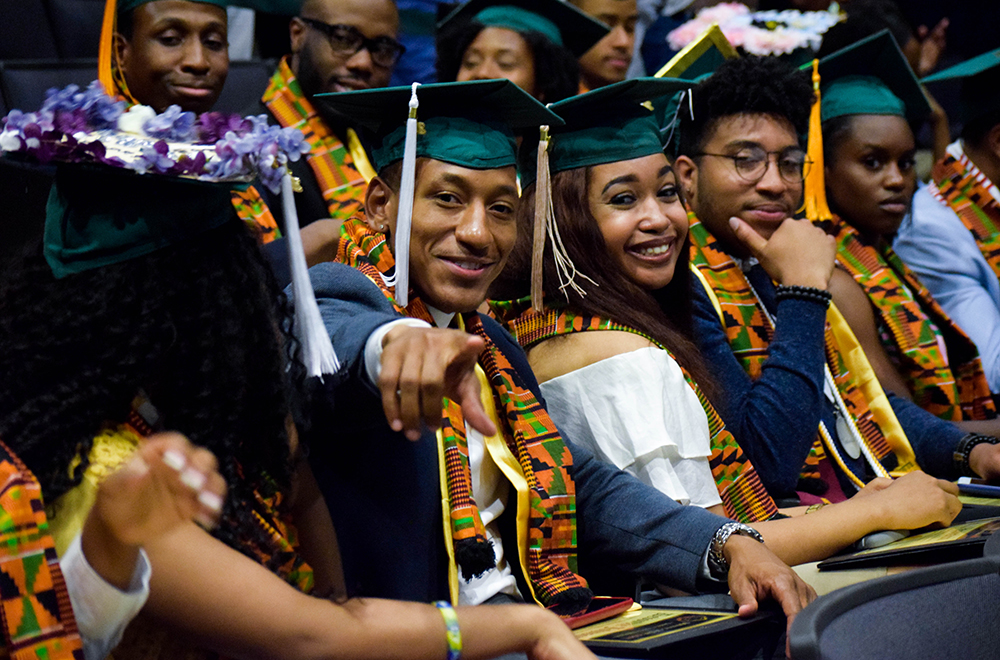 Campus Connection: Beginning in 2016, the ceremony has become an annual tradition, offering a more personal alternative to the University’s large, formal commencement ceremony. Now in its sixth year, the ceremony has grown, garnering roughly 200 student participants. 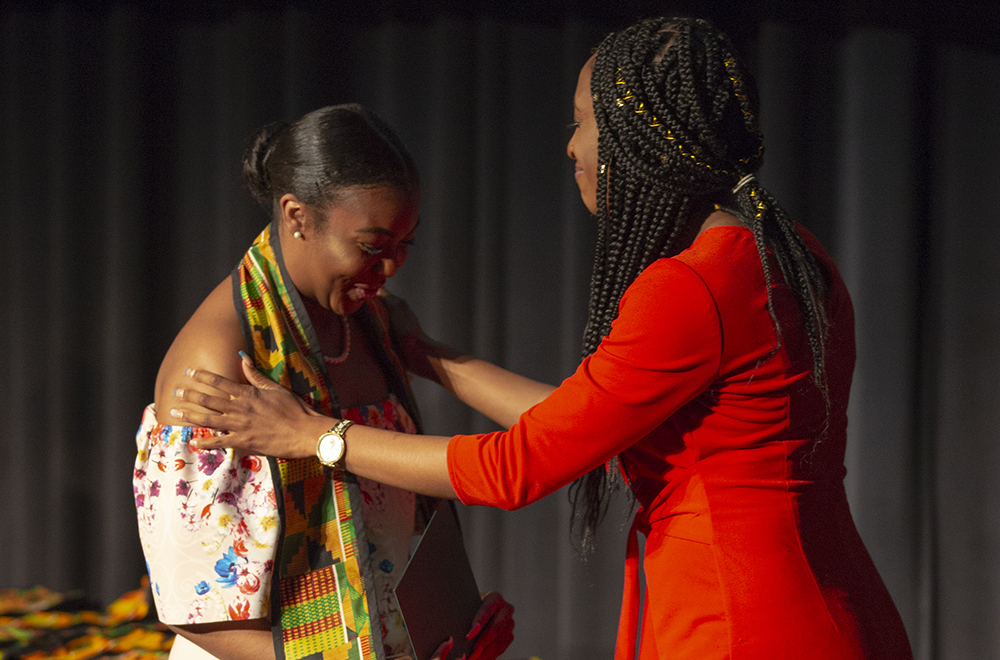 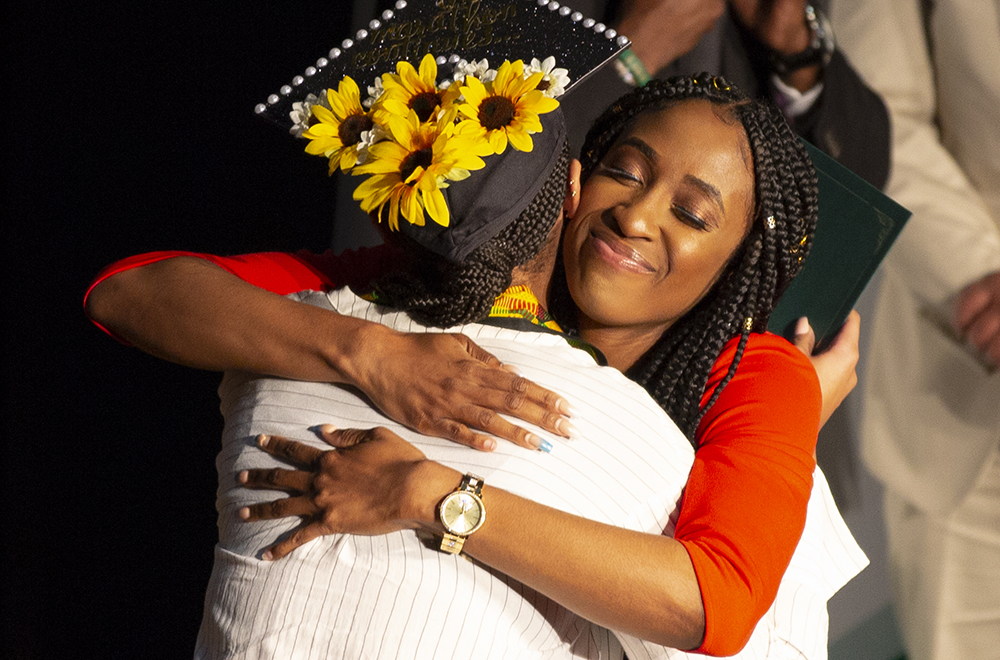 On the record: Conceived by students and campus leaders, the introduction of this ceremony was long overdue. It remains true to its original intentions, rooted in engagement, family and community.

“Given how diverse Charlotte’s campus is and how proud we are as an institution of that diversity, it was simply time for something like this to be created to reflect that student population, speak to the soul of what we stand for as a campus community and to make everyone feel appreciated,” said Solomon T. Franklin ’03, ’06, ’11M, assistant director of business operations at UNC Charlotte, who as student engagement chair of the Black Alumni Chapter when the Donning of the Kente ceremony was established played a vital role in starting the program.

“Participating in the Donning of the Kente ceremony, wearing that cloth, underscores that your achievement is something bigger than yourself,” said Brandon Nixon ’16, who was integral in launching the Donning of the Kente tradition on campus after interacting with students from other institutions that held similar events. “You go to a school and dedicate a lot of your time and energy during those years. And to hear your name, personal bio and future plans read aloud, by someone you admire and respect, recounting the ways you shaped your college experience and how it has positioned you to be successful moving forward, is a powerful reminder of just how important each individual is and how much of an impact you can have on campus.” 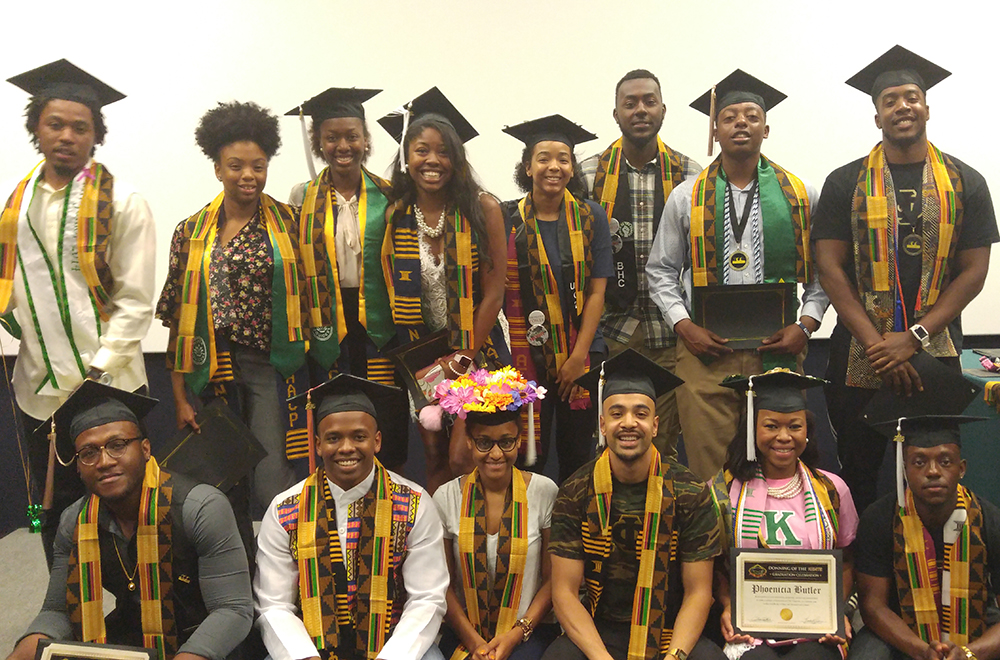 Brandon Nixon '16 (front row, third from right) joins his classmates at the inaugural Donning of the Kente ceremony in 2016.

Deep Dive: To understand the rich history of the kente cloth, Akin Ogundiran, professor of Africana Studies, Anthropology and History at UNC Charlotte, shares his insight on the historical significance of the kente cloth and its role in West African culture.

What is kente cloth? 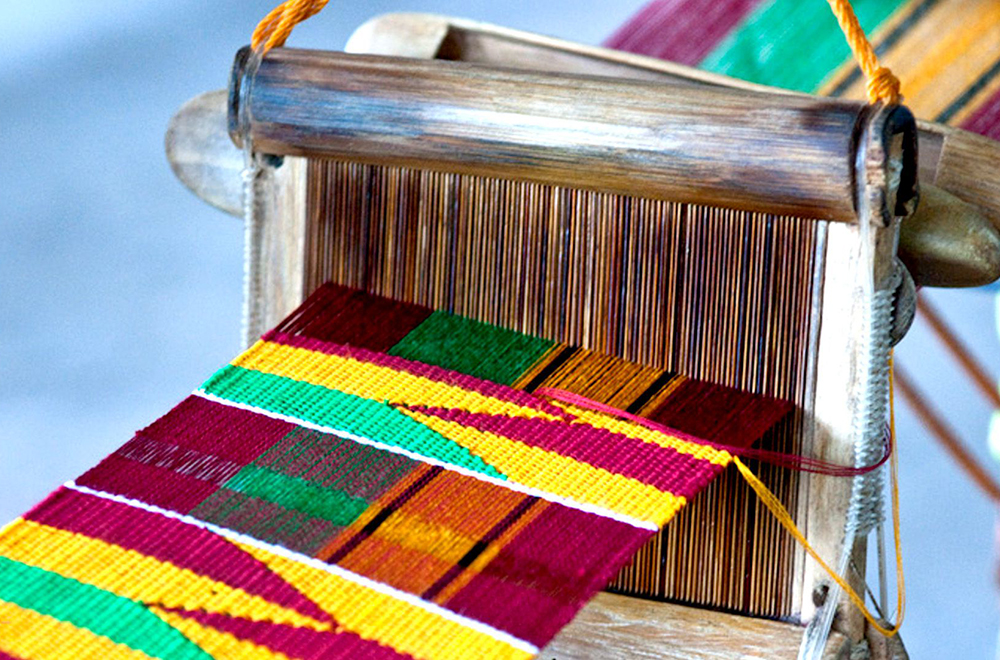 Why is it important historically?

Kente weavers are artists whose designs tell visual stories, depict societal values and communicate the wishes and sentiments of the wearer to the general public.

The Kente was adopted as the symbol of Black Pride during the African American cultural revival movement and the Civil Rights Movement of the 1960s. It became a popular political and cultural symbol soon after Kwame Nkrumah, the first president of Ghana, donned kente cloth on his visit to Dwight Eisenhower’s White House in 1958. 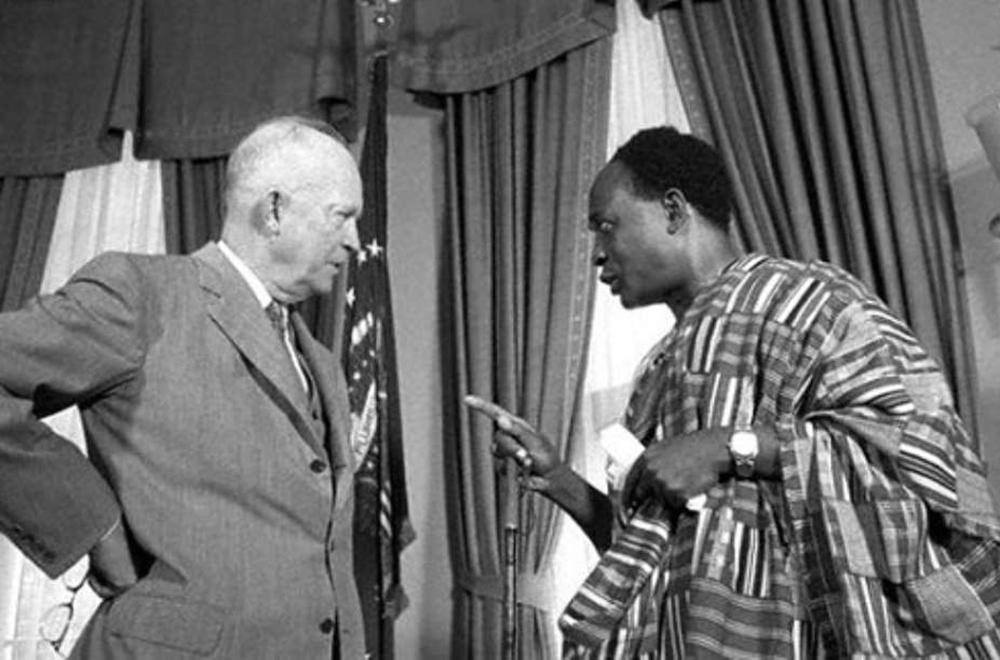 Why do graduates don the kente cloth to commemorate graduation?

But its use has grown beyond graduation celebrations. For example, Kente stoles are used in Black churches by ministers, preachers and other high-ranking church officials. Fraternities, irrespective of race, use kente on various campuses. In other African and African Diaspora countries, from Nigeria to Jamaica, kente is worn at college graduation to symbolize African heritage pride. 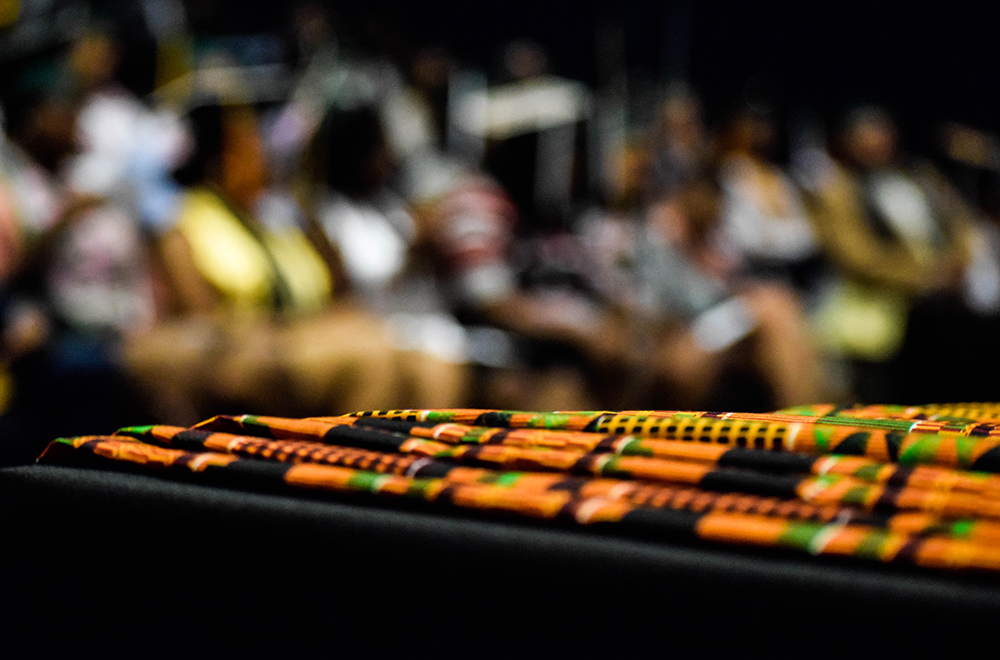 What is the significance of the colors?

As kente stole enters the mainstream, its palette has diversified beyond these historical colors. The range of motifs is as limitless as the human imagination. Traditional weavers continue to make kente in Ghana and Togo, and recent Ghanaian/Togolese immigrants to the United States continue this heritage craft.