PoleVolt™, an electric vehicle charging station developed by UNC Charlotte’s Energy Production and Infrastructure Center (EPIC) in partnership with Duke Energy, the city of Charlotte and the Centralina Regional Council was unveiled at the Ritz at Washington Heights park Thursday, Feb. 24, as part of Gov. Roy Cooper’s Charlotte visit to promote the Clean Energy and Equitable Economy for All executive order.

“The transition by vehicle manufacturers to electric vehicles is upon us and this station is just one example of how North Carolina is getting ready," said Cooper. "The quicker we move, the more affordable electric vehicles will become for everyday people. Our state is moving toward an equitable clean energy economy and public-private partnerships like this one will help make that happen."

Placing charging stations in the public right-of-way along the curb can be expensive and difficult because of the potential need to run underground wiring and install new charging bollards in or near sidewalks. Funding from the U.S. Department of Energy’s Vehicle Technology Office allowed the team to address this access disparity in a cost-effective manner, as PoleVolt™ can be installed on existing street lights, allowing the use of existing infrastructure.

As North Carolina's urban research university, UNC Charlotte is uniquely positioned to partner with Duke Energy, the city of Charlotte and the Centralina Regional Council in the development of the PoleVolt™,” said Rob Keynton, dean of The William States Lee College of Engineering. “PoleVolt™ is just one of many examples of how UNC Charlotte's research combined with community and business partnerships leads to creative solutions for current and relevant societal needs." 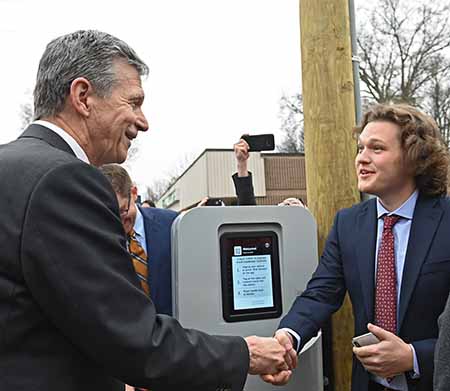 Two UNC Charlotte undergraduate engineering students — Grady Harwood and Philip Harmon —  led the development of the project’s cloud-based software to launch charging from a smartphone. The students, along with Rob Cox, associate director of EPIC, gave a demonstration of the PoleVolt™ to the governor and Charlotte Mayor Vi Lyles.

“PoleVolt™ allows us to look at new innovation through the lens of equity,” said Lyles. “This new station is an example of the city’s commitment to both sustainability and to the residents in our vital Corridors of Opportunity, areas of our city that have been underrepresented in the past.”

Photo, inset, Engineering student Grady Harwood, part of the PoleVolt™ development team, meets the governor during the demonstration of the EV charging station.