Globe is a reminder that the world is filled with possibility 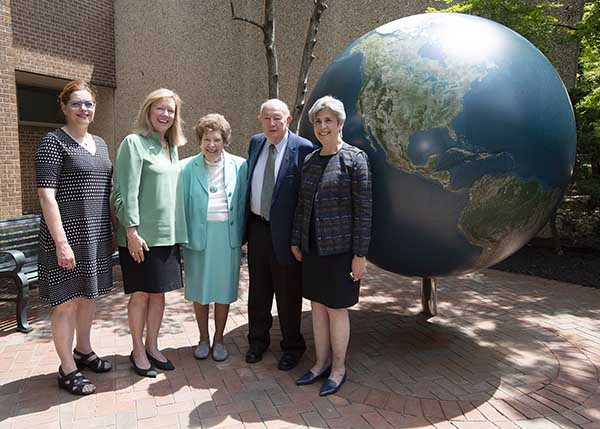 For years Norm Schul, first chair of UNC Charlotte’s Department of Geography and Earth Sciences, has wanted to commission a visually appealing globe for the department that would bring distinction and serve as a teaching tool.

Thanks to his and his wife Marianne's perseverance and generosity, the Department of Geography and Earth Sciences globe became a reality and was installed outside the McEniry Building. A special ceremony was held in May to dedicate the globe and honor the Schuls for their continuous support of the University.

“The Department of Geography and Earth Sciences globe will serve as a teaching tool, a symbol of the department and a lasting reminder to students that the world is filled with unlimited possibility,” said Chancellor Sharon L. Gaber. “Norm and Marianne Schul continue to make a difference in the lives of our students and faculty through their continued support of UNC Charlotte.”

Many students today, who navigate the world through a GPS on their smartphones, aren't as familiar with the ubiquitous desk globe or map of days gone by. The globe, made of metal and designed by artist Todd Ulrich of Worldfx Inc., is six feet in diameter, weighs 400 pounds and can be manually rotated. Manufactured with the most current Global LandSat Data, provided by WorldSat International, the globe not only provides a physical depiction of land masses and bodies of water, but illustrates the fact that everyone is part of an interconnected global society.

“A sculpture of our planet inspires us and reminds us of the awe in the world, our place in it and the need to care for it,” said Deborah S.K. Thomas, chair of the Department of Geography and Earth Sciences. “We are thrilled to have the globe stand as a gateway to the newly renovated McEniry Building that is the home to our department.”

Schul came to UNC Charlotte in the late 1960s and had an incredible 41-year tenure at the University. The Schuls were truly part of a generation of early University leaders who helped position UNC Charlotte as a regional leader in education and applied research. In addition to serving as the first chair of the Department of Geography and Earth Sciences, Schul founded the Institute for Urban Studies (today’s Urban Institute), where he worked to bridge the gap between the University and the growing city of Charlotte by organizing conferences on topics that would attract city officials and business leaders. He served as dean of the Division of Social and Behavioral Sciences, led The William States Lee College of Engineering’s co-op programs and founded the University's TV station, serving as its first program director. Marianne Schul ’73 earned a master’s degree in education in school counseling from UNC Charlotte.

Since retiring, the couple has continued to give generously of their time and resources, through outright gifts and planned gifts. They endowed a professorship to foster the career development of tenure-track faculty within the Department of Geography and Earth Sciences, endowed a scholarship for graduate students in counseling and special education in the Cato College of Education and established the first endowed fund in support of the Urban Institute. This fund provides annual support to host the Marianne M. and Norman W. Schul Urban Institute Forum Series which brings local leaders, national experts, and researchers from the Institute and the University.