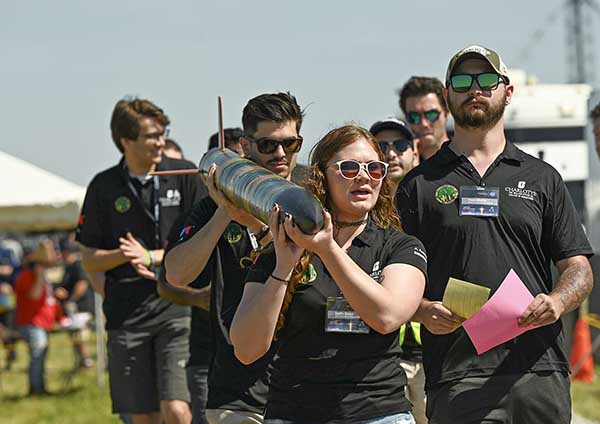 UNC Charlotte’s 49er Rocketry Club took first place in the launch division of the 2022 NASA Student Launch Competition, securing the event’s overall No. 1 spot for the second year in a row and earning a $5,000 prize. Winners were announced virtually June 3, following the competition, which took place in April at NASA’s Marshall Space Flight Center in Huntsville, Alabama.

Each year, NASA challenges middle school, high school, college and university students from across the United States to design, build and launch a high-powered amateur rocket, fly it to an altitude between 4,000 and 6,000 feet and make a successful landing. This year, UNC Charlotte broke the competition’s all-time record for altitude, coming within only two feet of its projected target, a distance that translates to .04% of its goal.

“In addition to meeting NASA’s requirements, the team’s rocket and engine design accounted for unknown factors such as wind and temperature the rocket might encounter in competition,” said the team’s faculty advisor, Arun Vishnu Suresh Babu, an assistant professor of mechanical engineering and engineering science. “Their design and repeated testing under various conditions contributed to the team’s outstanding results. Experiences such as these allow students to demonstrate proof-of-concept for their designs, making previously abstract concepts tangible. The opportunity to think innovatively and collaborate with one another sparks interest in research and prepares the next generation of engineers.”

All-around excellence and a competition record

“To be crowned the NASA Student Launch winner means your team excelled in all aspects of the program, from technical writing, presentation skills and STEM outreach, along with vehicle and payload testing and performance,” said Jill Eskew, manager of Marshall’s Space Flight Center resident management office, when announcing results. “[UNC Charlotte] always signed up for the first presentation slot, showing constant preparedness.” She noted the team’s record-breaking altitude achievement and its ability to reduce the distance-from-projection from 16 feet in 2021 to only two feet this year.